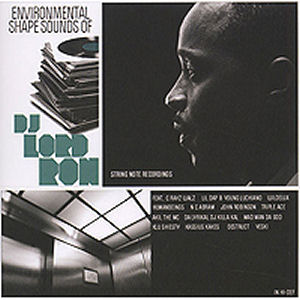 Oh Lord! DJ Lord Ron has been doing his thing for quite awhile. He has an extended resume of work that includes remixes and production for the likes of Guru, Mobb Deep, Nas, Inspecktah Deck, Masta Ace and Rakim. In 2008, Lord Ron released "My Mental State of Beatz" which featured the aforementioned late, great Guru, Willmatic, Triple Ace, Wildelux, Derek Strong, C-Rayz and Jadox, among others. This time around, DJ Lord Ron is back at it with his latest release, "Environmental Shape Sounds of DJ Lord Ron." The album features appearances from C-Rayz Walz, Lil Dap & Young Luchiano, Wildelux, HumanBeings, NC Abram, John Robinson, Triple Ace, Akil The MC, Killa Kal, Mad Man Da God, Klu Shiesty, Kassius Kakes, Destruct and Yeski. In OTHER words, a lot of people are on this joint.

Following the intro, things get started with C-Rayz' "Concrete Bars" which comes off as underwhelming after the first listen, but with repeated spins, it's easier to catch and appreciate all of the subtle metaphors on the song. Lil Dap (of Group Home fame) and Young Luchiano follow with one of their two songs on the album, "The Dream" as the two put their own spin on a famous opening line by The Notorious B.I.G.. Wildelux warns against the dangers of double crossing, double agent, "jellyfish niggas" on "Nocturnal Snakes." Over a beat accentuated by scratched in samples of Rakim, California's HumanBeings issues out a warning of "either the mic or your life." Seems simple enough, but it may be a tougher decision for some. NC Abram and John Robinson each hold down their tracks, "The Finest" and "The Torch," respectively. For Abram, it's one of two appearances on the album. Triple Ace begs to be taken to where the real hip hop is, regardless of where he is on his "City To City" song: "When I'm fresh in town, please take me to where it's rockin'/ Breakin', graffiti, DJ, pop lockin'." Jurassic 5's Akil The MC goes in on the self-titled "Akil The MC (I Guess That Be Me)." DJ Lord Ron himself shows up on a brief interlude explaining the importance of vinyl (records, not pants. For Heaven's sake, not pants.) He calls it the foundation of hip-hop, and goes on to give props to Kool Herc, Afrika Bambaataa and Grandmaster Flash. He also dedicates the outro of "Environmental Shape Sounds" to them as well.

Getting back into the musical side of things, the "It's Da R.C.P." (officially short for Rough Camp Productions) is all about ripping emcees to smithereens, the corners where they get that cream and putting emcees out of their misery. RCP, get it? Destruct gives a little bit of advice to the guys on "Ladies Come, Ladies Go" and Yeski spits "Fire Water" on the mic before NC Abram, Lil Dap and Young Luchiano come back for their second appearances on "The System" and "1, 2 Thiz Iz 4U" respectively. The aforementioned scratch outro is one minute of scratching with the same beat from "Concrete Bars" as the backdrop and could stand to be a little longer. Overall, heads will probably appreciate the no frills approach to the project. On the introductory track, Lord Ron mentions going back to the foundation: two turntables and a microphone. In that aspect, the project fares well. It's boom-bap from start to finish and never even dares to fathom the thought of being commercial. If that's the environment DJ Lord Ron is bent on cultivating, it shouldn't be long before more artists start to wind up in his musical ecosystem.