The Aztext :: Who Cares If We're Dope? Volume One 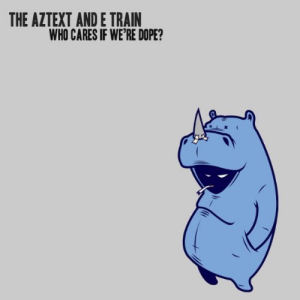 The Aztext are a Burlington, Vermont crew who have been making independent hip hop for the better part of a decade. It's been three years since their last release, 2007's "The Sacred Document," which was a solid album of old school, underground hip hop. Their latest album, "Who Cares If We're Dope?" is being released in four EPs, each featuring a different producer. Volume on features previous Aztext collaborator E Train.

The EP starts off with the hard-hitting "Just Like That." E Train channels 9th Wonder doing the Bomb Squad, with layers upon layers of soul samples creating a sonic collage. The Aztext lay out their mission, with Learic rapping:

"I'm on a mission to
Give hard-working people something to listen to
[...]
I simply find the best way to say the truth
Music is eternal youth
I use it as further proof
[...]
Cause we just build on what came before us
Predecessors who might have said it better
Why are we here?
We're all tired of the shit we hear"

They lay it all out in those bars. They make the kind of hip hop they grew up listening to, and use the mic to speak truth. There's no phony gangsta posturing, just honest rhymes. MCs Learic and Pro trade rhymes like Run DMC or the Beastie Boys. With their back-to-basics rhymes and E Train's crate-digging beats, its as if Puffy, Southern Rap, emo rap, or Kanye never happened. The Aztext live in an alternative universe where mic skills are more important than image, and where hip hop stayed firmly rooted in its original sound and aesthetic.

Given that context, it's interesting that "Time Is Just a Glare" uses the metaphor of hip hop as a prison, stifling creativity with its rules. "Conformed for too long/I want to move on," raps Pro. "Reinvent myself/New Artist/New Song." It's hard to tell if he's reacting against the current trends in hip hop that he wants to avoid, or the traditional sound that have become The Aztext trademark. On "Just Like That," Pro raps "Lately I'm terrified because the music doesn't speak to me," which further highlights their disconnection from the contemporary rap world.

The Aztext's response to this existential crisis of where they belong in the hip hop universe is to go as hard as they know how. "Rainy Day" sees them laying some introspective rhymes over melancholy soul, and they rap double time on "Waiting," It's the best song on the album, and not surprisingly was the track that inspired them to get back into the studio in the first place.

If you are a fan of traditional boom-bap, do yourself a favor and check out "Who Cares If We're Dope?" It's a welcome return from VT's finest.