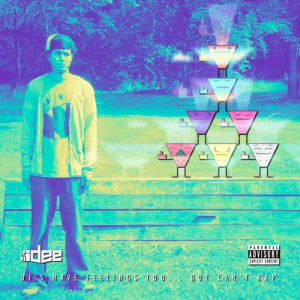 Those who know the name DJ I-Dee are familiar with his turntablist skills and/or his gamer tendencies. Occasionally he gets to combine the two together in tracks like "The Right." The bad news is that the companies who make video games got hip to the fact their sounds were getting jacked, and it's now as hard to clear a sample from Sony Music as it is to clear one from a Sony PlayStation classic. As a result some of DJ I-Dee's most fun songs end up being YouTube clips and bootleg MP3 offerings, but since he's still getting work as a disc jockey it's not hurting his career. In fact he was able to drop a debut album named "Solitude" in 2008 showing off both his production skills and wizardry on the wheels of steel.

In the two years since his debut album two well known deejays passed away within a month of each other in 2009 - the immortal Roc Raida and crossover turntablist DJ AM. One of the songs on DJ I-Dee's new album pays tribute to both - "Off the Decks" - and the entire album itself is dedicated to Raida. Despite this somber note these are not the "Feelings" that I-Dee was referring to in the title of his new album. If you look at the album's binding on a store shelf you'll only see the first half of it, but on the cover art the full message including ellipsis is clearly revealed: "DJ's Have Feelings Too... But Can't Rap." The former winner of the U.S. DMC Battle For Supremacy is now established enough as a DJ and turntablist that he'd actually like to explore the RAPPING side of hip-hop for a change, using his voice instead of just his hands to make music. He repeatedly refers to this as an experiment that he may or may not do again and goes out of his way to denigrate his own ability to bust rhymes; regardless, he proves to be a funny if unconventional rapper on "Part-Time M.C."

"At least I'm not annoying... AIGHT BET!
Yo dawgs, check my music on the MySpace friend request!
Write a rhyme so hard dude, especially this time around
Bar eight, Alvarez, let me slow it down
Catch me in the Hilton, Palm Beach with Mr. Milton
Smoke {cigarettes} while his grandmother be tiltin
Hip-hop is way too serious, so let me tell you why I'm here
THE ELEMENTS ARE SATURATED IN THE UTMOST FORM OF CHEER
Illest spic on the block, but no I don't cook raps
Don't disrespect me dude, save that for Lou Dobbs' racist ass!"

The only rap that may be more twisted than I-Dee's is his guest Eli Porter a/k/a E-Dollar, who sounds like a drunk wino who smoked two blunts before laying down his vocals. The self-produced instrumental is heavy on bass and low-end synth notes, which make it a head-nodder even if it's not exactly the kind of song your boys would understand if you cranked it in the whip. In a way the same can be said of "Moral Sensitivity" featuring Jean Grae and Oddisee - it pounds the speakers but it's not going to bang in the clubs. Still the heartfelt raps from Odd and Grae about domestic abuse touch a topic too rarely explored in hip-hop, which gives this often comedic album a very poignant and thoughtful moment. Grae's verbalism is not to be denied:

"It certainly takes a lot to come back
Personally found it easier to run back
Worked within me down to worthless, I was done
Tapped - glowing understatement, better numb faceless
No son, no friends in your mother's basement
Done chasin a lover's dream, fuck an engagement
Human being fuckin wasted doesn't cover basic feelings
of your soul spirit cut a hundred places like a paper snowflake
If I could just unfold myself and make it go away
Beauty floating from me, every breath I don't escape
I could take the black eyes, slaps, chokes, the pain
but I can't emote the fury of when you broke my name"

If some of you catch deja vu listening to "DJ's Have Feelings Too" and can't quite figure out where you've heard I-Dee's voice before, he has an unintentionally uncanny similarity to Big Daddy Donnie from Tha O Show. Since the O'sters are fond of locker room humor this only becomes more apparent on "IBS," which stands for bowel disfunction that most people resort to guzzling pink liquid to relieve. I-Dee declares himself "an old man trapped in a young boy's body" on his defiant "I Will Not Play Your Song" and certainly sounds like a crotchety old man when he says "90% of mixtapes aren't even mixed" - but of course being a crotchety old man doesn't mean he's wrong. Wrekonize jumps on the track to help him with the rap and be perhaps even more irate than his partner in rhyme. In general though the humor that is at the core of I-Dee's personality comes through on "DJ's Have Feelings Too," and the quality of the self-produced tracks makes for an enjoyable although relatively short (under 33 minutes) listen. I'm not saying I-Dee should give up his day job, and he's no Diamond D on the M-I-C, but he gets a pass here.