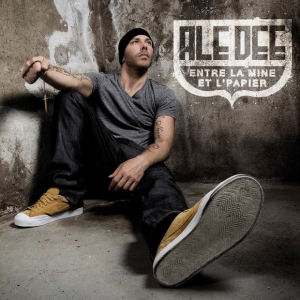 In my continuing my exploration of the French-Canadian hip-hop scene, we come next to Ale Dee. When I first picked up his CD at HMV I was momentarily confused. I knew he couldn't possibly be the similarly named rapper who had a fledgling rap career in the early 1990's, but they did appear to have one thing in common - a light complexion. While neither one would strictly be "white" in the derogatory way the word gets attached to the likes of Bill O'Reilly and Rush Limbaugh, they're not likely to be mistaken for Nelson Mandela any time soon. In the Quebec hip-hop scene such issues seem to be relatively minor compared to the ongoing furor Stateside, where being a white rapper not named Eminem can make you (A.) nerdy (B.) racist or (C.) both. Perhaps it's because so many French-Canadians feel mistreated in their own country, to such a degree that Quebec has tried to separate from Canada on several occasions, that the rap scene there is ironically more inclusive. If you speak French you're "in" regardless of your melanin.

Listening to Ale Dee pursue "The Paper" though, the similarities to his English speaking counterparts North AND South of the border are greater than the differences. "Larmes D'ange" (Tears of an Angel) has an epic musical scope thanks to Hotbox, who punctuates the instrumental with cinematic sound effects. It's "Victory" without Biggie or Puff. Gunshots ricochet off walls, women moan in ecstasy, lions roar and eagles soar, blades clash and helicopters zoom overhead scanning the sky. Thanks to some of the thickest liner notes I've ever seen in a cardboard (non-gem) CD package, the lyrics can be shared and I can even give you a brief translation of what Ale Dee has to say over this intense track (apologies for any errors in translation):

English: "I seek to know, I seek the responses
But I have so many questions and nobody to respond to me
I have my defeats to teach me how it is done
And the TV for me to learn how we are
We are animals, coupled with being able
Individualists who do not seek to self-promote
Across sex, drugs and war
In an iron world, we have neglected the earth
I seek to be better and improve myself
To become friendly without becoming devoured
Too many people abuse, and there are too many who profit
You just have to leave enough meat for the vultures to come back"

Obviously there are portions of this that don't switch neatly between two languages, but the intent still comes through pretty loud and clear. Ale Dee is lost in a world of materialism and misanthropy, struggling to make sense of it all. It is a world where those with power abuse it, greedily taking all of the resources and leaving scraps only vultures would come back for. This is "Larmes D'ange" - the things that would make even angels on high cry - the abuse of humanity. Ale Dee may not be able to set the world to rights through music alone, but he can at least turn a keen observer's eye on the situation and express his dissatisfaction with the world. This is a rap music tradition going back to "The Message" and beyond, and in any language it's one well worth continuing. There's a passion to Ale Dee's rap that can be felt in most of his songs even without literal translations thanks to the Hotbox beats and the flows Dee puts on them. In fact song titles like "Put 'Em Up" and "Hip Hop" speak for themselves. Other songs have English hooks that take me by surprise, like Cynthia Campbell singing on "J'pense A Elle":

"You don't know just how you make me feel
I finally touched, the sky
When I first saw you it was so clear
You'd teach me how to fly, how to fly"

The strength of this album lies in equal measure with Ale Dee's delivery, which shows his ten+ years of experience recording songs (impeccable timing and breath control), and in Hotbox producing beats that any rapper in any language would flow to. "Put 'Em Up" is an ideal example, layering up sounds on top of each other. An impassioned "woo-hoo-hoo," a dirty guitar riff, a sped up R&B vocal, a snare slapping drum track, these things individually would be nothing but in combination all become greater than the sum of their parts. In truth I got pretty lucky on this album because I had no idea Hotbox was Ale Dee's producer when I bought it - there was no indication of such anywhere on the shrinkwrap or the back cover. Thankfully because he is it's even easier to enjoy everything from the title track of "Entre La Mine Et L'Papier" all the way to strings of the closing song "La Femme De Ma Vie" (The Woman of My Life). It's not easy for me to recommend albums in French to those who don't speak the language, but Dee crosses the boundaries with Hotbox' help, so this is one that English speakers should definitely check out.