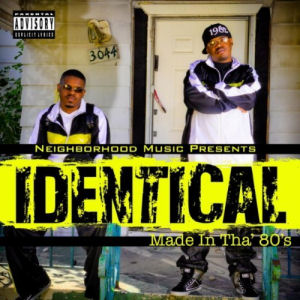 Identical has been working hard to achieve greater exposure since Tom Doggett first reviewed them for RR back in 2005. In that six year time span they've been seen on Real World XXV: Las Vegas and Video City, been profiled in half a dozen magazines and publications, and collected awards from Michigan hip-hop websites like DetroitRap.com for the quality of their work. Props on that. Doggett noted in his '05 review that the duo had talent beyond "the novelty of a rap group consisting of identical twins" but felt they needed to put in a much stronger effort musically and lyrically to succeed. In other words Identical had a lot of untapped potential and only needed to dig down deep and find it.

In 2011 Santoine (SJ) and Antoine (AJ) Jackson are back to show and prove how they've progressed since their debut. They've gotten the recognition and exposure of artists out there hustling to make it, but it's still about the music they've MADE at the end of the day. One thing's for certain - these twins are unapologetic whether you like what they're doing or not as evidence by "Still Don't Give Ah Phucc":

"Talk tough if you want and get'cho mouth blew out
It ain't no bitches over here, bottom line, flat out
I hear yo' internet beats, seen them whack videos
Hear 'em talkin big money but ain't got no hoes
Good to see it's SJ, internationally known
How the fuck you representin when you always at home?
Even the hoes know you hoes - a whole lot of tricks
Meanwhile that same bitch break it off for a pimp
I have my Avey 10 niggaz run straight in yo' crib
Don't make me tell Tweak and Sparky where you layin yo' head
Plus my riders down in Tyler, Adrienne and 6
No matter what coast we on, we always in the mix
Always been the shit, that's just statin the facts
Disco hurt a lot of feelings, but to hell with that
Identical in this bitch, gettin rich off rap
I bet them local rap niggaz wish that they could say that - bitch!"

As you might expect given they're identical twins, AJ and SJ sound very similar vocally, although SJ's voice may be just a little bit gruffer than his brother. Even though they're Eastern Michigan representers, I hear a little bit of Cleveland to their flow - like Bone Thugs meets D12 sans the singing and harmonized rhymes. As for their topic matter, Identical are playing all the cards you would expect from an underground group looking to get to the next level. "Lose Control" is a bass and electronic melody combo straight out of the G-Unit playbook, while the "Remix" throws in a singer to encourage everyone to go "to the left (to the left) to the right (to the right) like a 2011 "Cha Cha Slide" while giving the beat a more hard rock treatment. The big baller Birdman style song is here too - "Fannem' Wit Da Money (Cool Me Down)." And of course what's a mainstream rap album without a song that samples "Between the Sheets" that talks about freaks? "Nasty Girl" is the ticket. "Made in Tha 80's" covers all the bases.

To be honest, that's exactly why I was a little bit disappointed with "Made in Tha 80's." Now I'm glad Identical didn't take the title of their album literally and try to make a cliched parody of a classic LL Cool J or N.W.A. album - thankfully good sense prevailed. However in listening to this relatively short 12 song album (under 40 minutes) I never heard a single track that was BOOM mindblowingly outstanding. The name of the group is unintentionally accurate - they're identical to pretty much anything you'd hear on the radio. Despite a tailor made gimmick given to them from childbirth that would make them stand out amongst the competition, they really don't, and one almost gets the impression they're a bit sensitive about it. They're quick to down what they view as local rappers who never got big or achieved stardom, but they always say the same people you see going up are the same people you see coming down. I don't know if I'd knock local Michigan rap if you're only about a half-step removed from only being local too.

Here's the bottom line on the twins from Michigan trying to get it in. The beats by The Olympicks are serviceable, but not outstanding. The raps are the same. There's nothing wrong with "Made in Tha 80's" other than the fact that in six years time, they just barely improved. Perhaps if they were only local to MI that would put them well ahead of the curve, but on a national level a lot of up-and-coming rappers passed them by. Unless they show more musical and lyrical progress on the next album, they're in danger of getting lapped. No one listening to "Made in Tha 80's" would say this was a terrible album, but perhaps if it was it would actually be a bit more memorable.