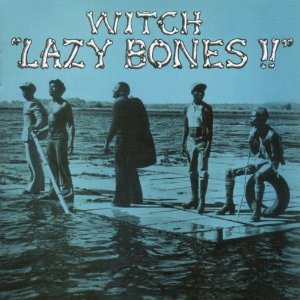 One of my favorite records this year was Gonjasufi's trippy "A Sufi and a Killer," which combined hip-hop and acid rock. It got me interested in exploring more psychedelic music, and the second reissue by Zambian acid rock band WITCH seemed like a good place to start.

WITCH were a Zam Rock band active in the mid-Seventies, when the troubled Republic of Zambia saw a thriving rock scene that included Musi-O-Tunya, Amanaz, and Peace. Their records were originally released on a small label, and had been out of print and incredibly rare for decades. In 2007, Stones Throw general manager and Now Again Records owner Egon came across a Myspace page by Zam Rock pioneer Rikki Ililonga. Egon and Ililonga began corresponding, which led to Ililonga getting Egon in touch with WITCH vocalist Emmanuel Jaguri Chanda. Chanda was more than happy to see his records in print again, and the result was a reissue of WITCH's "Introduction" and "Lazy Bones!!"

"Lazy Bones!!" doesn't get off to a promising start. The sound quality isn't great. The record seems to be mastered from a scratchy vinyl copy, and the sound is muddy and full of imperfections. Lead track "Black Tears" is a clumsy, lumbering song. It begins with a turgid opening, and when the band starts to cook at the minute-thirty mark it just serves to highlight Chanda's amateurish vocals. At their worst, like on "Black Tears," WITCH sound like a high school garage band playing a facsimile of rock music with more enthusiasm than talent. After listening to "Black Tears" I was almost ready to write WITCH off.

I kept with the album, though, and happily discovered that "Black Tears" is a misleading false start, the weakest track on the album. Things immediately pick up on "Motherless Child." The band coalesces into a strong groove. Drummer Boidi Sinkala hammers his set like Black Sabbath's Bill Ward or Jimi Hendrix drummer Mitch Mitchell.  Bassist Gedeon Mulenga completes the rock solid rhythm section, while guitarist John Muma lays on the fuzz guitar and wawa, complimented by Chris Mbewe's lead. All the musicians are excellent, and provide some wicked if occasionally sloppy grooves. Even Chanda's thin voice sounds better on the rest of the album, his earnestness compensating for his lack of polish.

Musically, WITCH combine the heaviness of Black Sabbath and Cream with the playful psychedelic elements of early Pink Floyd, Jimi Hendrix, or the Creation. "Motherless Child" and "Off Ma Boots" sound like Southern rock, while "Tooth Factory" and "Havoc" are heavy acid rock. "Little Clown" and "Lazy Bones" could have been recorded by a San Francisco band in 1967.

While the horns, polyrythms, and indigenous instruments typical of African music aren't present, WITCH do add a slight African twist to Western rock. It's subtle, but like Chanda's South African accent, definitely present. This is especially true with the lyrics. On the surface, they tackle standard sixties material like psychedelic trips ("Strange Dream," "Off Ma Boots"), or calls for peace and understanding ("Havoc"). However, its all informed by their experience living in the Republic of Zambia during an uncertain time. The turmoil they were describing were very close and real for the members of WITCH. As a result, "Lazy Bones!!" feels realer and rawer than most of the Western rock from the same era.

Despite the dodgy recording, muddy sound, and Chanda's iffy singing voice, "Lazy Bones!!" is an incredible album. It's trippy, it's rocking, and it has moments of fierceness matched with moments of beauty. There are hooks galore, and the lyrics go a shade deeper than most acid rock I've come across. "Lazy Bones!!" is highly recommended for anyone who wants to explore a side of African music not often heard, or who just wants to rock out. This album is an uncovered gem, and a ray of warm sunshine during this cold winter.