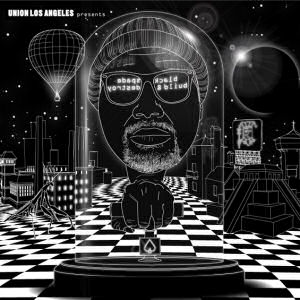 It took no more than a quick glance over the cover art of "Build & Destroy" for me to realize I was in for something out of the ordinary. Done completely in black and white, the front of the album features a dark silhouette of a man's face, a praying mantis, a hot air balloon, a planet from outer space, and what appears to be the skyline of a futuristic city, all resting on top of a slightly trippy checkered pattern. And indeed, my initial assumption proved to be correct. Take the spacy vibes of Outkast's album "Atliens," give it a slightly electronic new age twist, and throw in crooning soul and jazz samples mixed with singing and rapping, and you will have some idea of what kind of music "Build & Destroy" encompasses. While this may seem confusing, one thing is certain; this is not your average "hip-hop meets soul music" album. Black Spade's first official mixtape has a certain funky vibe to it, and this is by no means a bad thing. Even in a hip-hop game where true originality and creativity are becoming harder and harder to find, there is simply nothing else out there right now that sounds like "Build & Destroy," and this alone makes it a worthwhile listen.

This may be his first mixtape, but Black Spade has been in the game since 2001, and his music has an air of maturity that resonates throughout the CD, as he raps from the heart and explores a wide range of issues in his life. On "Fall in Love," which is reminiscent of Common's classic song "I Used to Love H.E.R.," Black Spade chronicles his back and forth relationship with hip-hop over a serenading flute and trumpet sample. "Untitled" features a soft, meandering grand piano and synth over a barely audible set of drums, as well as soulful background vocals from Coultrain, as Black Spade looks back at his roots and raps: "Many summer nights lookin' up at the stars/Dope man drive by, we like that's our car/A lot of my homies didn't make it this far." And the reminiscing continues on "Da Art of Storytelling Part IV," a remix of the Outkast song with the same name. After the first verse by Andree 3000, Black Spade takes the mic and begins: "Once upon a time, not long ago/When the freshest emcee didn't have to blow..." As he goes on to rap about how his father was locked up for selling drugs, it is clear that Black Spade has seen and been through a lot in his life, and he doesn't shy away from imparting his knowledge and lessons learned along the way.

What really sets "Build & Destroy" apart, though, is the array of spaced-out synths and other sounds that give the album a unique and almost eclectic feel that Black Spade feeds off of. "New U" sees him slow things down at first over a set of shimmering synths, a driving bass line, and a simple riding drum pattern. As he picks it back up and starts to rhyme, his steady flow and laid-back delivery mesh perfectly with the mellow vibes of the track, and he comes through with one of his best verses of the mixtape. "Enemies Frenemies," has a much more hardcore feel to it, with a reverb-heavy kick and head-bobbing drum loop. As an eerie acoustic guitar pluck and an aggressive synth also lace the beat, Black Spade outshines his two guest artists and delivers a powerful verse.

Perhaps the most telling song, though, is "Planet Rock," which begins with a simple statement: "I want to hear future funk." Then the beat drops, and it is nearly hypnotic, as it pits a set of gliding synths over a deep bass that rolls across the track. Black Spades paints a picture of what is essentially a space-world music utopia, rapping:

"See, see space is the place
Soon as you hit the Planet Rock the bass is in your face
And on that planet man we all one race
One nation, right under the groove
Where the DJ's commissioned to make your body move
Hovercraftin' across the flow
Planet rock is a place we all can go
Where we all can grow, where we all should know
No question, knowledge itself is mandatory
It's good to have a second home when mother earth bore me"

By now, it's obvious that Black Spade is not your average rapper, and his unique subject matter and production style make for a very interesting and diverse mixtape. There are pure hip-hop tracks such as "Breakthrough," and there are songs that belong more in the realm of R&B/soul, such as "Running Gunning," but the bottom line is that Black Spade almost always manages to keep things sounding fresh. At 18 songs plus an intro, there are undoubtedly a few songs that probably could have been done without. This does not take away from the fact, though, that "Build & Destroy" is one of the most creative albums on the market today, and it is a release that every alternative hip-hop fan should not miss. And while some hip-hop purists may be turned off by the unusual nature of the mixtape, there is no denying that Black Spade is an intelligent and well-versed emcee who brings a unique approach to the hip-hop game.