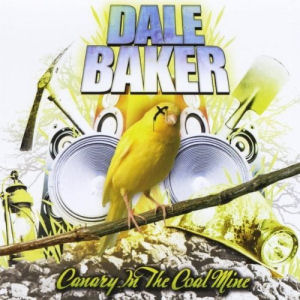 "How many people actually read these? I'm serious. If you read this let me know. This album has taken some weird turns and twists. It took some time to finally get it ready to go. There have been a lot of cats that have been very instrumental in getting it done." - Dale Baker

From that point on Dale Baker begins to thank said cats in alphabetical order. Mr. Baker, consider that your notice that the liner notes to "The Canary in the Coal Mine" were in fact read. Then again as a music critic I may be the exception to the rule as I was trying to glean some sort of insight into who you are and what your album was about. Like so many albums I receive from Long Range Distribution this one was completely bereft of a press release. I'm not dogging or faulting them per se, I appreciate them servicing our website with material to review, it's just sometimes hard to get a handle on why someone is being presented to us for coverage. Usually the label has some sort of angle they're trying to hook you with - some interesting biographical fact, some locally successful single, some history of being a misanthrope that suddenly found the light through music, et cetera, etc.

There's only three things I'm sure of about Dale Baker with no press release and a minimal amount of information in his liner notes: he's from Detroit, he has a MySpace page, and he has a Twitter account. That's it. To be honest I'm glad that's all I know about Dale Baker. Since there's no press release trying to grab my attention or sway my opinion before I even put "The Canary in the Coal Mine" in to listen to it, the only thing I have to go on is whether or not Mr. Baker is interesting musically. One thing definitely stood out immediately on my first scan of the CD - the track "Decible Level" (decibel intentionally misspelled) samples the Blue Öyster Cult song "Godzilla," a sample I first heard in rap close to twenty years ago on "Problem Child" by 3rd Bass. The good news is that everything old is new again - in other words it was such a good guitar riff to loop the first time I'm not mad at Mr. Baker for reusing it. He's got a Johnny Richter meets Big B thing going on vocally that pairs well with the heavy musical backdrop:

"This ain't a dream, it's more like a fantasy
It's all about the salary, it's all about the pageantry
It's all about the tragedy when real life sets in
Got no defenses, I deliver the message
Falls on the deaf ears, they hearin the best here
Poundin they chest yeah and it sounds kinda hollow
Hard pill to swallow but tomorrow will be harder
Cats steady fallin off, they try to play the martyr"

The single syllable producer WOO is responsible for putting the song together, while a DJ named Country Fresh provides copious amounts of scratching throughout. Woo is responsible for almost half of the tracks Baker raps on and seems to have the best musical sensibility out of all of his partners. The heavy pounding drums and 1960's funk allow Baker to "ride the rails" on "Train of Thought" even though he vows "it's not a rap record" and he "needs more street cred." That's not what people will hear on "Get Home" though, which with a deeper vocal tone could be mistaken for the white trash blues of Everlast. Some people would read that as a knock, but it works well for Mr. Baker. He's got the same thing going on with "Cut You Down," a track where Woo samples the obvious Johnny Cash song of the same name, though Cash could never have imagined Awol One or Spoken Nerd spitting rap bars over it.

The picture that emerges as you listen to "The Canary in the Coal Mine" is that Dale Baker somehow managed to become a country/folk/blues rap artist despite hailing from Motown. I can't say that's impossible given Kid Rock started out as hardcore hip-hop and turned into a crooner, but unlike Mr. Ritchie it seems that Mr. Baker wants to add country to his hip-hop and not the other way around. That for the most part is the reason his album works. There are other times he seems to be leaning more towards the rap rock sound of the Kottonmouth Kings, particularly on tracks like "Detroit Punk Rock" and "Castro's Iron" featuring Asylum 7 and Braille - the latter much more enjoyable than the former. When he goes for pure hip-hop the results are mixed - "That's What We'll Do" is aight but "Soul Clap" should make Showbiz & A.G. want to give him a pimp slap.

In the ultimate summary I still don't know who Dale Baker is or what motivated him to record "The Canary in the Coal Mine," but I do know the analogy his album title references. Miners used to take canaries with them underground because they were more susceptible to poisonous gases - if the bird died but the men were still alive, they knew SOMETHING was wrong and it was time to get the hell out. Dale Baker is rapping, and occasionally singing, like the proverbial canary in the coal mine - trying to get out his message before he too runs out of oxygen. His message, like his liner notes, has been received - country rap rock can still sound good from time to time.