SciFi Stu :: From the Heaviest Heart to the Coldest Soul 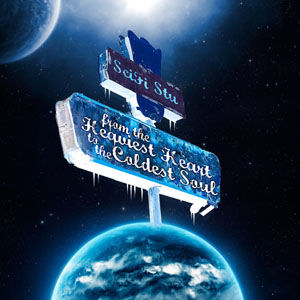 One of the peculiarities of modern rap music is that trends persist. The most lasting and dominating trend may be what was once called gangsta rap, but there have been plenty others that have propagated across the music universe. Sometimes attached to iconic acts (Wu-Tang Clan, 2Pac), sometimes to movements less identifiable with individuals (jazz hop, horrorcore), these hip-hop trends continue to survive on their own, without the approval of the masses or the attention of tastemakers.

"From the Heaviest Heart to the Coldest Soul" is Scottish producer SciFi Stu's second release within a year, and while I haven't heard "Around My Way," it looks like his chosen niche is mellow leftfield hip-hop. As the guest list shows, there are plenty of US MC's who feel at home on such beats, including veterans such as Count Bass D, Vast Aire, John Robinson and Moka Only. SciFi Stu's problem is not so much his field but rather how he occupies it. Because I've heard this record before. Well, truthfully I haven't, but everything about it is awfully familiar.

The thick, dubby groove of "It Works," the glassy funk of "Break Loose," the chopped anthemics of "Where Ya At," the absent-minded piano loops of "The Recipe," the shy soul of "Deep Thinkers," the sloppy dissection of pianos and vocals of "Study on Us," the blunted lounge lizard grooves of "The Reason," the homely tapestry of "The Touch," the melodic fairy lights of "Never the Same" and "Tuesday," the subdued, joyously rocking sounds of "In the Air," "The Will" and "No Swag Needed." It's all been done before, in the almost exact same manner.

With that out of the way, the album has quite a few redeeming qualities. Stu duplicates the soundscapes of DJ Spinna, Moka Only, J. Rawls, Stro the 89th Key, etc. with considerable success. For a moment or two the whole thing slips into a state of lethargy not uncommon to this brand of hip-hop, but overall this is a stimulating piece of music both musically and lyrically. It should be especially noted that the rappers don't behave like your typically unmotivated guest speaker does on such occasions.

Playing with words but still focusing on life's realities, D-Strong has the whole world in his hands on the optimistic opener "It Works." Venomous 2000 represents the best of underground rap on the wake-up call "Where Ya At," laying down compelling line after compelling line. Orlando, FL's Shinobi Stalin drops human science over dark jazz snaps on "Tape Pop." LIFE Long and Elohem Star may commit the cerebral rapper's cardinal sin by calling their joint "Deep Thinkers," but they do manage to elicit some head-scratching of the good, curious kind. Veteran Assassins note that they "came from that era," and going by flow and vocal tone one of them could indeed be mistaken for Common and the other for Planet Asia, but they are Veteran Eye and ethemadassassin straight out of Greensboro NC, lacing "In the Air" with engaging action movie imagery.

Nebz Supreme and Moka Only lead aspiring lyricists by example on "Study on Us": "I burst purses like church service / worthful purpose / Tread the Earth surface with my girth and work earnest / avert skirmish; rappers is wormish / unfurnished beats is what they leave while I been real since my first verbage." Assisted by John Robinson, the duo of Remarkable Mayor show and prove with substantial rhymes on "No Swag Needed": "'Why oh why did I need cappuccino?' / I was fallin' asleep, the game full of free throws [...] I'ma be old, spittin' verse to my nurse, brah / and when it come my time to go / have my eulogy spoken rhyme form and flow."

Ill Poetix aim to heal hip-hop with "The Touch," inspired by one of the most seminal hip-hop songs of all time, "I Used to Love HER":

"Hey yo, so much would astound you
just let the whole world surround you
Get an extra oomph when I'm around crew
It's like everything's soundproof
when me and Sci move massive
when we touch bases to classic
Pieces of a puzzle that been missin' for too long
You wishin' to move on, that ain't gettin' the crew strong
I'm livin', so who's wrong?
Givin' it to you raw
Yeah you spittin', it ain't hittin'
so listen to the truth, y'all
I demand some help
The game need a touch of the hand from the man himself
It seems like everybody got the same plans for wealth
But like father and son I make you understand the belt
You need beatings for takin' somethin' pure to indecent
Common used to love HER, but she cheated
Yeah it ain't a secret, we all know she loves to fuck
but yo, her heart fills up when she's touched"

"From the Heaviest Heart to the Coldest Soul" can be suggested to fans of soft-spoken rap vocals, kosher rhymes and jazzy beats. Personally I would hope for a less anachronistic approach the next time around.