WC :: Revenge of the Barracuda 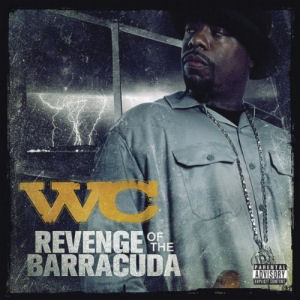 Things just ain't the same for gangstas. Dre said it in '99 when gangsta rap was king, so it's hard to imagine what he and his comrades would think of a scene dominated by skinny jeans, striped sweaters, and AutoTune, especially now that the immortal Nate Dogg has passed on to the great beyond. Then again, for vets like WC, the more things change, the more they stay the same. Sure, his stint at Def Jam is a distant memory, and while he's not moving the units he did during his heyday he's stayed busy on his independent grind, now pushing a career that began as one-half of Low Profile in the '80s into a fourth decade. When last we heard from The Shadiest One he was "Guilty By Affiliation" with a 2007 sleeper that ranked among the year's best, and "Revenge of the Barracuda" picks up right where the predecessor left off with a predictably heavy West Coast sound engineered by Hallway Productions and Jah Zilla.

One of the many things I liked so much about "Guilty By Affiliation" that also rings true for "Revenge of the Barracuda" is that Dub pulls few punches. In a time when authentic West Coast gangsta rap is a commodity in increasingly short supply, it's reassuring if not refreshing that WC's gang-related rhymes deal almost exclusively with hustling, crime, gunplay, threats, scheming bitches and shiny cars, staying true and perhaps above all, representing. The music itself is endlessly solid but never overambitious. Dub's as consistent as Ghostface is prolific, but he's come a long way since the Maad Circle. He carries the torch for a Los Angeles gangsta rap scene that hit its commercial peak in the mid-90s, still flaunting the same creased khakis, bandanas, and Chuck Taylors he did the day "Bow Down" dropped. His unmistakable stuttery, staccato delivery lends itself brilliantly to his constant grimacing—come to think of it, I can't even begin to imagine what he'd look like smiling.

The production also shines throughout "Revenge of the Barracuda." WC continues to build upon the thumping, at times eerie sound that shot Westside Connection to the top of the charts, but what's ironic is that the tracks on his solo albums are often better than those on either of the supergroup's LPs. The Hallway Productions duo which served as primary architects behind "Guilty By Affiliation" provide absolute bangers on the opening title track, the Ice Cube and Maylay collabo "You Know Me," the memorable "That's What I'm Talkin' About," and the clever "Reality Show," each replete with thundering percussion, stark, murky basslines, and moody, tinny instrumentals:

"It ain't a Simple Life, this is grindin', all the above
I'm gettin' a shot of Henn, nigga, fuck A Shot at Love
After ridin' my stick, my homegirl said she want a square
But she need some westside dick
I said, 'You know I ain't right,' I dig her out all night
Fuck her and kick her to the curb like a Basketball Wife
Plus she ain't down enough to be mine
If we get caught the first question asked she's droppin' a dime
A nigga in jail, lookin' like The Biggest Loser
With the recedin' hairline of Carlos Boozer
It's a real life, a nigga can't play with this
Keyshia Cole would even say that's The Way that It Is"

Kokane comes through for a delicious duet on "What's Good," and EQ & Flip's subtly funky "Walkin' in My Taylors" is classic Dub. WC's ceaseless energy is infectious and unparalleled even by the 40-year-old's younger guests, on display in vicious marathon verses:

"Loved by few, cared for by the majority
I'm the reason these rappers keep security
[...]
You niggas is temporary, Facebook gangstas
I put faces on obituaries, nigga
Dub Cuda, the bandana dangler
OT countin' dirty money with the hanky up"

"Stickin' to the Script" is a strong posse cut featuring DPGC mainstays Daz Dillinger, Kurupt, Bad Lucc, and Soopafly, and the snaky Eazy-E-sampling "100% Legit" maintains a fresh quality despite its obvious nods to the past. Late highlights include the atmospheric Jigg production "D-Boy," the exquisite Juvenile collabo "Hustla" that would make Rick Ross salivate, his self-titled Trick Trick-laced "theme music," and the infectious Maylay-aided "The Spot" produced by Fredwreck. Although "Doc Mandingo" and "Back to the Basics" are labeled bonus tracks, they both boast the quality production and hard-hitting rhymes of the rest of the tracklist, and the latter features Double Gunnz and long-silent Brooklyn duo All City.

If recent albums are any indication, Dub's peers such as Ice Cube and Kurupt are unsure of where to go from here, on the one hand hoping to maintain their status as left coast dons but also attempting to update their sound for a more contemporary audience. WC knows exactly where he stands in today's scene and continues to provide the impenetrable gangsta rap that endeared Westside Connection to millions and has kept him in the game for nearly 25 years. What's ironic is that WC has actually adjusted better to changing times than either of the aforementioned, and "Return of the Barracuda" doesn't sound a second dated. Despite numerous contributing producers the sound and album are extremely consistent, in some respects a throwback but undeniably fresh as WC continues to churn out legitimate West Coast anthems. Virtually anything that could be said for "Guilty By Affiliation" also goes for "Revenge of the Barracuda," and nobody is putting it down for the almighty W in 2011 harder than Dub Sizzalean.