Cheeks :: The Potential :: Bandcamp.com
as reviewed by Matt Jost 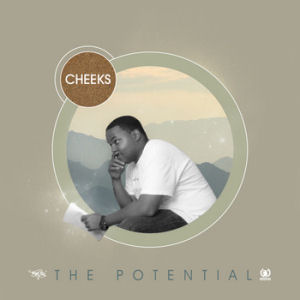 Doing the solo thing must be located up in the single-digits of the periodic table of hip-hop elements. To the point where it becomes really hard to think of rappers with the slightest bit of notoriety who never branched out on the solo tip. Consider any of the prolific collectives, crews, and clicks - sooner or later there were individual albums. Even rappers who in their group never really had to share the mic to begin with suddenly go solo. And yes, even trusty sidekicks are known to take a shot at a solo career.

But flying solo is not without risks. Especially if you leave the comfort of a group, there may be turbulence ahead, despite the impression of finally being in charge of your career. Enters Cheeks, a rapper with the Michigan collective Tree City. His free offering, "The Potential," lives up to its title, to both its detriment and advantage. Equipped with a fresh and pleasing vocal tone (not unlike Aceyalone's), Cheeks delivers associative scripts that deal with his situation as a local heavyweight and an observant citizen.

He goes from the tongue-in-cheek intro where he is denied entrance to his own show to "To Be a Star," where he declares himself prepared for stardom: "When the fame hits souls never remain stainless / I keep a heart of stone just to stay A-list (...) I shine like I'm born from a nebula, the rap Federer / style, grace and etcetera." With some sympathy one could say the sparkle is retained until the finale "Shine," an energizing boost of soulful salvos featuring and produced by Man in Charge.

Somewhat grudgingly I have to admit that the album's most memorable track is "The WIZ." Grudgingly not just because it's an unexpected club track with lyrics that live it up as if they were penned by one of those rap figures that always have money (Baby, Jay-Z) - but also because for all the hype I still don't know what the WIZ is (apart from an ill-fated 'Wizard of Oz' adaptation) after the song's over. Still, the stop-start groove, rich organ-driven instrumentation and vocal harmonizing laid down by Breathe Easy Music make for an airtight tune.

What's evident when listening to "The Potential" is that Cheeks is a strong teamplayer. The songs with features are collaborations in the best sense of the word. "Soul Sample" finds him, guest rapper Walter 'The Soul' Lacy and singer Ivy sharing a piece of their soul, Lacy pointing out, "pursuin' fortune and fame we forgot the struggle and pain / from bein' chained and whipped to pushin' whips and chains."

"Hello" is all about getting to know each other and not rushing anything as Cheeks and songstress/femcee Nickie P ponder romantic possibilities as the band plays lush jazz. Muted keys and finger snaps set the stage for "Moon," an abstract yet intimate D-Lux production that also hosts Prhyme Rhyme Boss and G.P. The latter, a fellow Tree City member, is also present for "BESTINTOWN," along with Buff1 (of Athletic Mic League) and L05 (of Celsius Electronics) as the four MC's weather the electronic storm conjured up on the boards by L05.

But to get noticed beyond the local stage a handful of adjustments seem in order. In terms of tempo and density Cheeks might want to dial it down a notch simply as a way of sharpening his performance on all fronts. The styling/swaggering element should more clearly play second fiddle to the songwriting. That could allow him to advance into the Elzhi realm. Then again "The Potential" doesn't have to be the whole package yet, as a free collection of 11 often successful tracks. It's just that 'potential' is a term from the demotape days. A rapper intent on shooting for the stars needs to aim higher.