King Louis :: Hits In My Sleep :: White Owl Drop That
as reviewed by Patrick Taylor 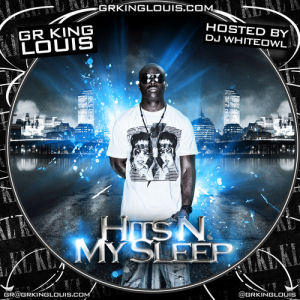 I'm not a huge fan of mixtapes. I don't like the crappy sound quality, I don't like the annoying DJ drops, and I don't like the lack of quality control. The average mixtape is 74 minutes of music that sounds like it took 90 minutes to record and produce, and could have been distilled down to three or four decent songs. Even celebrated mixtapes like Big K.R.I.T.'s "Return of 4Eva" contain too much filler for me to want to spend a lot of time with them.I have limited time to listen to music, and there are way too many legitimate releases to listen to for me to spend much time on mixtapes.

However, they exist for a reason, namely to help a rapper get heard and keep their name out there. The strategy worked better ten years ago when hundreds of rappers were dropping mixtapes. Nowadays thousands of rappers are dropping mixtapes, and it's too much of a chore to weed out the few decent mixtapes from the mountains of mediocrity. I'm a music critic and even I don't have the desire to listen to the fifty mixtapes released every day to figure out which one might actually be worth the hard drive space.

So when Midwest rapper King Louis dropped me an email promoting his latest mixtape, my first inclination was to ignore his message. After all, I get about ten to twenty emails a day announcing the latest mixtape by some up and coming rapper, all proclaiming that the mixtape is an instant classic. There literally aren't enough hours in the day for me to listen to all the free music that gets sent to me, which is a strange position to be in. However, King Louis sounded sincere, and I was in the mood to hear something new, so I downloaded "Hits In My Sleep" and gave it a listen.

Let me start with the negative: "Hits In My Sleep" suffers from the usual mixtape issues. The production ranges from decent to uninspired, and the whole thing lacks the polish and of a proper album. On the positive, host DJ White Owl is unobtrusive, and it's not filled with skits. That's more than I can say about anything Madlib has put out in the past year, so score one for King Louis.

More importantly, King Louis can actually rap, and it sounds like he spent some real time working on his rhymes. A lot of mixtape artists seem to spit whatever is on their mind at the moment. If they are crazy/talented enough (Lil B, Lil Wayne, Danny Brown), the results are interesting. Most of the time, though, you end up with a bunch of tossed-off rhymes over tossed-off beats, and they don't deserve the time it takes to download them, much less listen to them. So score another one for King Louis.

Not that he's saying anything mind-blowing. King Louis is like a lot of mixtape rappers, concerned with getting brains, partying, and telling everyone how rich and successful he is. Unlike a lot of mixtape rappers, he often does it well. Case in point, "Pull Your Hoe," about how he will pull your hoe, and have her "suck a nigga like lipo." He's not going to win a Nobel prize for the subject matter, but he spits his rhyme with the casual ease that separates gifted rappers from pretenders.Other strong tracks include "Bobby," in which King Louis raps over a sparse, trippy beat, telling a contender. "I am international, you are just a local.". "Early Morning," has a sleepy, jazzy beat; King Louis spits fire over a jazz loop on "Yo"; and "Flight Risk," which flips Pete Rock and C.L. Smooth's "T.R.O.Y."

Of course, this being a mixtape and all, there are a fair amount of forgettable songs. Heartfelt lyrics can't redeem the alt-rock mashup "Bother," and "Shut Your Mouth" is sub-Wacka Flocka Flame. Lyrically, King Louis spends a lot of time describing how incredibly wealthy he is, which I always find totally boring. Even when he's rapping about bullshit, though, he does it with at least some finesse, and more often than not you can tell he's actually trying.

"Hits In My Sleep" isn't brilliant, but there are enough bright spots to make it worth investigating. King Louis may not break any new ground,but he treads familiar territory with talent and style. This is one mixtape that is worth the time it takes to download.