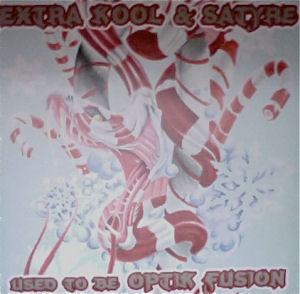 A long time ago in a Dirty Laboratory far far away, Extra Kool and Satyre used to be Optik Fusion Embrace

. No more. Whatever this crew is now, they're not what they used to be, and they want that point to be perfectly clear. To that end they went to the extraordinary length of making their artist name and album title read side by side as though it were one complete sentence - that is unless backwards reading like Yoda you are. That apparently wasn't enough though - they had to up the ante and go De La Soul on us with the lead track off their new album entitled "Optik Fusion Is Dead."

Extra Kool: "We used to be Optik Fusion, back in the day
Then we both grew up and we went separate ways
Now it's five years later and we're workin on the down-low
No more deejay, we still work it out though
One found love and the other had heartbreak
Got burned bridges like it tastes like a cornflake
Played out of state for a handful of seasons
While livin in Denver just tryin to keep breathin
Then I finally found love in the form of a blind chick
Hope she never leaves or learns to sink my battleship"

Satyre: "Back to the present though, the current episode
No need for holdin on, better just to let it go
Let it ride, no chips on my shoulder blades
Life's a dealer with a stacked deck poker face
Wakin up with our name on the guest list
Brushed my teeth and cooked my lady breakfast
Spend the day writin words over breakbeats
This is where my heart and the Earth need to make peace
[...] Satyre, with the hip-hop name drop
Hit the bullseye even with my aim off"

The artwork for The Artists Formerly Known as Optik is like a surreal Salvador Dali painting colliding with Willy Wonka's candy factory. If one were to take the peppermint candy canes as a metaphor for something that's "extra cool" to the tastebuds, it seems perfectly clear that the rapper believes whatever he was has melted away even in the cold Denver air. What of his partner Satyre though? Where does he fit into the picture? That's not clear on the cover though it's much clearer on the flipside: "all beats by A. Gardiner - for beats e-mail satyratm at yahoo dot com." As such it really wouldn't be a shock for Extra Kool to be the lead rapper especially given he has experience as a soloist already. The thing is he's really not. He and Satyre continue to trade off bars all the way through this seven song EP.

There's an intentional or unintentional irony to the Extra Kool & Satyre song "Everyday Living." As much as Rebecca Black has been chastised and/or made by her YouTube sensation "Friday," the song appears to have little more depth than Black's infamous hit. Kool and Satyre rap about the events of their daily life like a long series of inane Twitter updates. The first verse talks about trying to get to work on time while being stuck in gridlock, half dressed and starving hungry. The second verse talks about stumbling out of bed at 9:45 in the morning, rapping in the shower, and spilling milk on the counter while attempting to fix a bowl of cereal. I'm not exaggerating - that's literally the entire story. Since one member of the team IS called Satyre, it's easy to assume this is one big joke on the listener, so perhaps they should do a "Everyday Living (Rebecca Black Remix)" to bring the whole thing full circle.

Ultimately this short EP (clocking in at under 25 minutes) showcases the friendship between Extra Kool and Satyre, while emphatically denying any relationship between their current incarnation and past episodes. If there's any part of the quality of this EP in their past life though, I'm not sure why. Then again songs like "Santa Rosa Hand Cuffs" and "My Mother Ate Your Army Men," while amusing, don't earthquake the world with tales of struggling to succeed in rap while living off Totino's Pizza Rolls. There's an undeniable Asher Roth quality to their music, yet regrettably it seems to be missing Roth's ernest frat boy hip-hop charm. This is not poorly produced, aggravatingly bad, or unlistenable rap music in any way shape or form - it's just that it doesn't seem to have a creative spark that carries all the way through the presentation. The EP starts strong and then the light slowly fades out, leaving you to wonder if they should embrace Embrace after all.