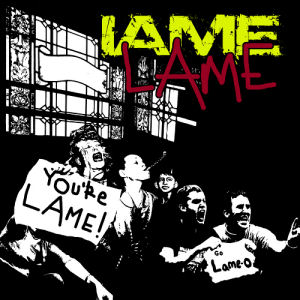 IAME chose an unfortunate rap name. On the surface, it's a great idea: It looks like a tag, it's short, and it makes the statement "I am me." The way it is spelled, however, means that most people mispronounce it "lame" since an uppercase "i" and lowercase "l" look the same. After having to explain to the millionth person that his name was IAME not Lame, he decided to have some fun with the mispronunciation and title his latest album "Lame." He plays with the concept throughout the album, making fun of himself.

The Portland, Oregon rapper is part of the Sandpeople and Oldominion crews. "Lame" was funded by a Kickstarter campaign, the website that lets you raise money for a project. IAME was able to raise almost $3,000 to record the album through his fanbase, which shows how supportive they are. I was struck by that $3,000 price tag, both because it is not an insignificant amount of money for an independent artist to raise, and because "Lame" sounds like it cost a hell of a lot more to record and produce. It is an ambitious album. Producer Smoke M2D6 layers live instruments and singing over dusty loops to create a vibrant sound. This isn't some simple laptop hip-hop, it is the sound of a producer using the studio as an instrument.

The closest comparison to IAME's style would be Atmosphere before they mellowed out. Like Slug, IAME is a gifted rapper and storyteller who manages to lay out his faults and shortcomings without sounding self-pitying. The persona that emerges on this album is a man who is struggling to find the good in life among all the evil, and is trying to overcome his worst impulses and habits. "I once was a minor in possession of a minor depression," he raps on "Leverage." "Now I'm grown and it's stress I'm consumed by."

The centerpiece of the album is the seven-minute-long track "Thy Will," that examines religion and the injustice and evil in the world. The song criticizes religion, and yet at the same time is religious, and goes through several tempo and mood changes before it's over. It's a deep, heavy song, not the kind of thing I'm used to hearing on a rap album. IAME get's philisophical on "Bright Side," rapping about how the rat race gets him down"

"Everything to lose and nothing to gain
Except a little food, the fans and the fame
Success could come with time
But I'm already the richest man alive
But this can only be realized when I'm not working
Better yet not grinding
When I'm not paying what they want for unleaded
When I'm not driving across town hitting every stoplight
Rush hour road construction this city's not right
But it's the system
The wages that I make
The paper that I chase
That preoccupies me
That's why I'm always late
I mean what's a deadline
When we'll all be dead lying in the ground someday"

It's not all heavy on "Lame." "Introducing McJameson" celebrates IAME's Irish heritage and his favorite Irish whiskey. IAME has a sense of humor about himself, mixing self-deprecation with confidence so that he comes off as human but not pathetic.

"Lame" is anything but. IAME proves himself to be a skilled rapper, and Smoke M2D6's production is consistently good. Like a backpack "My Beautiful Dark Twisted Fantasy," "Lame" is incredibly ambitious and mostly successful. It's an epic album that is well worth seeking out.