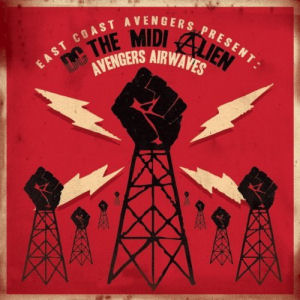 When last we heard from East Coast Avengers in 2008, the Massachusetts trio was fed up with eight years of the Bush administration and responded with their fairly controversial debut "Prison Planet," which featured the widely censored single "Kill Bill O'Reilly." Now that George W.'s out of office and we've elected the candidate for change, they oughta be sitting happy, right? Well, give a listen to "Another Hundred Days In":

"Another hundred days in, I'm dazed and confused
This lack of opposing views is slowly used
To get elected, we've only been neglected or slowly fused
It's Bush resurrected, he looms in the spirit of Obama
Consumed by the spirit of Osama, but karma's a bitch, brings the drama
And hope's just a four-letter word, it's a verb
Some hippie turned upside down, back around for a proper noun
It's absurd, blurred by Wikipedia, slurred by wicked media clowns"

So much for change we can believe in. "Avengers Airwaves" is overseen by producer DC the Midi Alien and his groupmates Trademarc, who first came to prominence as John Cena's cousin, and Esoteric, an underground vet who's held it down for years with A.O.T.P., his frequent collaborator 7L, and solo. The album is built around skits in which the group bounds a Rush Limbaugh-like character and hijacks his broadcast, and features a massive roster of angry underground favorites including Slaine, Vinnie Paz, Sabac Red, Outerspace, Main Flow, King Magnetic, Reks, Blaq Poet, Termanology, Akir, Big Shug, Blacastan, Doap Nixon, and Reef the Lost Cauze among others. The posse cuts kick off with "Man Made Ways," featuring a Caucasian dream team of Slaine, Sabac, Vinnie Paz, and Trademarc, who paint an apocalyptic, Huxley-esque picture:

"I used to have the mind of a revolutionary now it's dead
'Cause the devil got these images that's dancin' in my head
If I don't take these pills then I can't get outta bed
And I gotta pay the bills, so I gotta take my meds"

Then again, if you ask Outerspace on "Ain't Shit Changed," it's nothing new brought about by the Obama administration:

"On the edge of my bed, cleanin' my forty-five
I supported change, but I'll support no lie
Oil for blood, offshore drillin'
Will it put an end to these offshore killings?
No hood debate on Obama, McCain, man
They sell you a dream, they all o' the same, man
That's why we gotta come up with a game plan
To cop guns illegally and know where to aim them"

"Avengers Airwaves" is a study in political frustration, painting a world where differences between the left and right are trivial and insignificant, poor people have no voice of influence, conservative commentators speak to armies of zombies, and modern technological innovation has robbed us of our freedom. Even though it was released in February, the budget battle and Osama killing of the last month would be mere minutiae from their standpoint; they'd stop short of nothing but a full-blown revolution. Still, it doesn't all work. Any veterans of an Ill Bill or Vinnie Paz record will find themselves swimming in familiar proclamations of the Armageddon that blend together with their doomsday imagery. They rhyme "Obama" with "Osama" more times than I can remember slapping my palm against my forehead and throwing both arms up in exasperation. The tracks that stand out are those which actually speak to a particular cause rather than blindly railing against the government, such as Jon Hope and LB's "Recession," Reks' excellent "Birth of a Nation," with superb production by DC, and Nabo Rawk and Apeshit's "Disposable Heroes," which highlights the poor treatment of American veterans once they arrive home.

"Avengers Airwaves" walks a fine line between usual A.O.T.P.-type fare and real politically-charged material, not sacrificing rowdy entertainment in favor of commentary. DC the Midi Alien provides the heavy array of hardcore beats you'd expect for the assembled personnel, with some slower and more poignant tracks added for good measure. My only real beef is that some of the samples are a bit obvious, and that at nineteen tracks and 78 minutes it's a bit of a marathon, especially given the minimal variation in sound and content.

I remain conflicted on "Avengers Airwaves." On the one hand, it's a solid, at times powerful collection of technically astute beats and rhymes delivered with passion and energy. It's always refreshing to hear rappers address political and social issues, and fans of the furious stylings of A.O.T.P. and Non Phixion will love E.C.A.'s latest. The guest list is fairly spectacular, and there will never come a time when music that speaks for the voiceless and oppressed isn't relevant—it's well done, effective, and it's also fun. On the other hand, though, for protest music there's little here that's particularly profound. Anyone likely to pick up an East Coast Avengers album already knows that Bill O'Reilly/Rush Limbaugh/Michelle Malkin/Glenn Beck/Sean Hannity/Insert-Your-Favorite-Conservative-Commentator-Here is a Nazi. Where it was revolutionary for Public Enemy to ambiguously demand "Fight the Power" in '89, E.C.A. need to give us a little more to work with. We understand your disenchantment with Beltway politics; the stage is yours, now what do you wish to say? That we take down the American political system in favor of an anarchic new world order? That we dismantle capitalism so no one is neither comparatively poor nor rich? That we send a bullet to every politician in a suit courtesy of the lower income brackets? The only lasting message is that citizens should be wary and not believe everything they see, but something makes me think that Zeus could rain lightning bolts down on the White House and they'd still be unhappy. Thus we find East Coast Avengers in 2011: rebels without a cause, but rebels nonetheless.