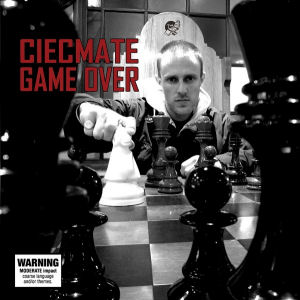 In Jesal 'Jay Soul' Padania's review of the 2009 Ciecmate & Newsense duet "A Tale of Two Cities" he offered equal parts praise and criticism for the Australian tandem. While generally a fan of the production and Australian pride the Melbourne and Canberra emcees had respectively, he somewhat controversially suggested that a lack of black immigration had caused Australian emcees to not develop the character of their counterparts worldwide. As EIC it fell to me whether or not to disperse this theory to the masses, and as I do 99.99% of the time I sided with giving the writer the forum to express his opinion regardless of whether or not I agreed. There's not much point to soliciting a diversity of opinion for a review site and then arbitrarily silencing any of them that don't match mine. That being said as a long-time listener of Aussie rap I honestly couldn't disagree with him more. To me Australian emcees have plenty of the TONE and CHARACTER he so vehemently suggested that they lack.

Oddly enough it's Ciecmate's latest album "Game Over" that I feel makes the point about what Aussie rappers are like. The Tornts produced "Leave Me Alone" sets a menacing backdrop for a man experiencing either paranoid delusions or a genuine and credible sense of dread from people trying to jack him up. Everyone from people fighting too close to cops sneering too much causes the tension in Ciecmate's voice to rise as he considers his options for solving his growing fears:

"'What you lookin at?' The call of an idiot
Trying to impress the chick he's with
But what's a grown man doing with a 16 year-old kid
pickin fights in the middle of the night - that shit isn't right
I oughta tell him to FUCK OFF!
Open the tram door, grab him by his nuts and chuck him off
But it's not my problem
However if he acts up at me then he's got one
I'm not one for getting threatened, especially with a weapon
I take it off him, break his neck and, cave his head in"

There's no doubt that when Ciecmate expresses over and over again that he wants these threats to his person whether real or imagined to "LEAVE ME ALONE" that he has all the charisma necessary to put across a feeling of real horror backed by his growing urge to fight back to his person. The funny twist to this choice of example is that "Leave Me Alone" is the only track that Ciecmate DIDN'T produce on this entire album. The rest of the album has him pulling double duty as both producer and emcee, something which he proudly makes a point of on the song "I Ain't the One to Fuck With." He's apparently a little cross about having (1.) been overlooked as a beat maestro (2.) producing so much he never gets to enjoy success and (3.) a lack of support from the industry. He uses Diamond D samples from "Best Kept Secret" to help make his point but lets his lyrics do the brunt of the work:

"Fuck these overhyped acts that lack, I know you bite
I'm the original prototype, I put years into this
Success didn't happen overnight
My crew were working on their social life
While I stayed at home, and mixed down their vocals right
Either way your CD's for free, they're still overpriced
Cunt, don't front, like you don't know I'm right
Cause I'm the bloke that might leave you with broken sight
Even though I'm quite friendly I've been known to fight"

So many rappers have fallen off trying to handle their beats and their rhymes at the same time, which makes the quality of Ciecmate's album that much more impressive when realizing he had 17 of 18 tracks to take care of all for dolo. He avoids the one thing many Australian rappers have in common which Jay Soul DIDN'T take Ciecmate to task for - a tendency for the accent to get in the way of the clarity of his wordplay. While some other Melbourne based rappers have this problem in spades, Ciecmate's rhymes are crystal clear both in their delivery and because as noted himself he "mixed down the vocals right" on production. Even on songs like "Mad Vexed" where the Wu-Tang Clan sample might be somewhat predictable, it's no less musically enjoyable.

Despite having so many tracks on the whole, "Game Over" is actually a relatively short album, clocking in at under an hour's running time. This shows another of Ciecmate's strengths - the ability to make his points quickly and effectively without doling out bloated tracks. The only track to clock in at over four minutes is "You Know the Song," and considering he shares the mic duties with guest star Maggot Mouf it's perfectly acceptable. Guest appearances are quite limited actually, with only Bias B dropping in on "Never Walk Away" and Diem showing up on the sinister synth and strings sounds of "Iron Fist." Ciecmate is more than capable of taking the ball and running with it, so it's hard to imagine this perceived lack of personality and lyrical breath control ability my reviewing counterpart found on his reviews. To be fair though it may be that Ciecmate has grown in both skill and stature in the two years intervening. Nevertheless I think it's safe to say Ciecmate's "Game Over" won't be needing the reset button.