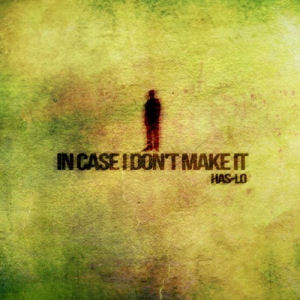 Philadelphia-based producer/MC Has-Lo has been around for a few years now. He released his debut album "Fuck Has Day" in 2007. 2008's "Small Metal Objects," got a fair amount of love from fans of underground hip-hop. Now he's following it up with "In Case I Don't Make It."

The title could refer to two things: in case Has doesn't make it as a rap artist, or in case Has doesn't make it out of this word alive. "Is this an unfunny joke or a suicide note?" he asks on the title track, which closes the album. Given the dire subject matter and depressive tone of the album, it sounds more like a suicide note than a letter of resignation from hip-hop. Over the course of the album's sixteen tracks, Has examines the trials and tribulations of his life, from his straggling career to his shaky faith in God to his relationship issues. Has excels at storytelling. laying out a series of vignettes over moody beats that paint a picture of a man at the end of his rope.

The high point of the album is the devastating "Everything Is." Has drops a subtle beat built around a keyboard, and then raps about life slowly falling apart.

He delivers those lines with a subdued sense of resignation, the sound of a man who has been beaten down by life and come to accept it as his fate.

The album continues on that trajectory, with track after track offering a downtempo examination of the psychological state of a man deep in depression. If that sounds like a downer, it is. The production is understated to a fault, as is Has-Lo's flow. To put it bluntly, while it is amazing in small doses, this album is a chore to get through from start to finish. The songs start to sound the same, and there isn't enough variety in subject matter or sound to make the entire record engaging.

That said, I still think that this is worth the eight dollar download. There are pockets of absolute heart-breaking brilliance on this album, and although Has-Lo isn't the most dynamic rapper, he's great at painting a vivid picture with a minimum of words. He's sort of rap's Raymond Carver, the poet/writer who so vividly captured the quiet desperation of suburban life in books like "What We Talk About When We Talk About Love." "In Case I Don't Make It" is a heavy album, but one that deserves attention.