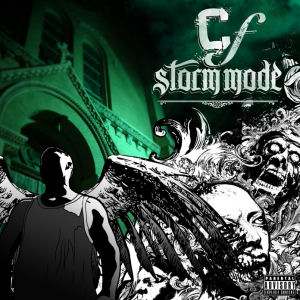 The Creative Juices Music camp just laced us with the brand new "Storm Mode" CD from Nelson Morales III, a/k/a CF, a/k/a Constant Flow. You can call him whatever you want to, but the kids in Jersey City neighborhood probably called him a fatherless bastard. That's not intended as disrespect to CF in any way - he puts his whole life story on display on only the second song of the entire album. It's a gutsy call to go there so early since people who have never heard of CF before this album might want to feel his flow before knowing him that well, but listening to him spit over Niroshima's cello laced instrumental for "Another Battle" will convince you that conquering hip-hop is nothing to him after the life he lived so far.

"So grandma kept the house in order
And grandpop well he's a alcoholic
Always liked to talk shit, sippin on his Old Milwaukee
Six in the mornin over whole wheat toast and coffee
Treats her awfully, he verbally abusin her
Evil intent I think he workin with Lucifer
The man's demon possessed, but grandma angelic
Keepin her wedding vows man even 'til death!
In much need of a rest raisin her grandson
through these tantrums hopin she'll be leavin this mess
Yes, tryin to get to Florida but her racist neighbors
hate her with a passion ain't a fan of the foreigners
Call her spic, she bitch slapped my moms
Always talkin shit, then they kidnapped her dog
Grandma frantic entered cardiac arrest
Grandpa panickin tryin to revive her beatin on her chest"

When CF says he's "dealin with it raw" in the chorus, HE AIN'T KIDDING. I respect CF's cajones for manning up and giving us his pain on wax, and there's no doubt it was therapeutic for him as well. On other tracks he's not just sharing his pain, he's dishing out a little to the ignorant know-nots of the world. The Scram Jones produced "Walk With Me" has no sympathy for people who view "the world in black and white" as he says "I'm not a beaner, jalapeno or a papi either/Don't call me mira and don't call my woman mamacita." He's also got no love for inferior unmotivated rappers on "Last Take":

"Club will feel my skills but that thesaurus make me T-rex
Man I beast with these words, while y'all be talkin BS
The court's in session, and y'all be callin recess
When I cross examine I cause a famine cause I ain't eat yet"

Damn! How did CF sneak up on hip-hop like that and body the whole industry? He might just be right when he says "I'm on a state of mind that y'all ain't even thought of yet." He's not just talking shit y'all, he's SAYING shit. The boxing metaphors of "Show Business" are spit quicker than Manny Pacquiao's hands (see what I did there) and in CF's own words "hit 'em like a Dodge Ram." You might have heard emcees be pugilists on a track, but CF takes it to a nasty level that would have given the Chino XL of "Here to Save You All" days a run for his money, and IDE deserves the credit for laying the table for him to go there. Same goes for DJ Static producing "King," which might have a predictable sample on the hook, but that doesn't make it any less welcome. The rattling sounds on the track make you think a snake is coiling to strike at any moment, and given the way CF rips mics it's not an unapt analogy.

It's a little bit hard to not constantly freak out at CF's talent. Sure he's been in the game more than a few years already and his bio lists any number of lyrical battles he's won from DMC to Fight Club, but there's NEWNESS to what you hear and the kind of raw hunger that propelled Eminem to worldwide fame when he hooked up with Dr. Dre. CF gets nasty on songs like "Popping," mocking his foes for being "cocky musicians (who) flop and ain't drop nuttin hotter than Fu-Schnickens." OUCH. Each time you think that Constant Flow must have run out of rounds in the tank, he comes back firing off more lines.

In between CF's snaps are the gems - mocking the regionally locked attitudes of emcees on "Listen," decrying the thievery of capitalism in a way Immortal Technique would approve of on "Voodoo Economics," and talking about the realities of being a touring artist on "Travel." There's not many people with this much talent who manage to make the beats they're on sparkle, but working with the likes of Frank Sasoon, DJ Static, IDE and Niroshima he makes good instrumentals sound like something once in a lifetime - and maybe they are. I'm not sure that DJ Premier, Alchemist, Scott Storch or Pete Rock really could have done him any better, because CF's comrades at Creative Juices know what he's about and fit him like a glove. Then again I'd like to see someone TRY - I want someone to give CF just one Primo beat for a record and see what he can do. 2011 should be his year.