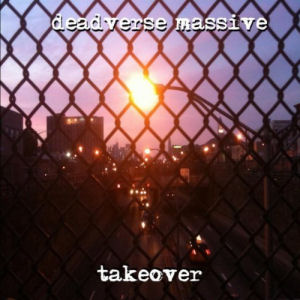 "The Takeover" is the newest album from the East Coast Deadverse Crew, led by producer/rapper Dalek. I have to admit that I have slept on Dalek for the past thirteen years. His first album came out on punk label Gern Blandstein, and he has been associated with anticon, a label whose music I respect but don't like to listen to. On top of that, Dalek is named after an enemy from Doctor Who, the geekiest of geeky sci-fi series. I figured his music would be super esoteric and too arty for his own good. I've heard a few songs from his 2005 album "Absence," which were buried in industrial noise.

So imagine my surprise when I bumped the "Takeover," which turned out to be grimy East Coast rap in the (cold) vein of Cannibal Ox and early Wu. Dalek produced the entire album, and his beats are all sample-based, flipping snippets of jazz and soul into a dark, foreboding backdrops. He flips Jimmy Smith's "Root Down (And Get It)," which the Beastie Boy's used for their track "Root Down." Dalek is accompanied on the mic by Oddateee, D.L.E.MM.A., Gym Brown, Dev-One, MoRikan, and Skalla, all of whom can actually rap, and drop the kind of tough-as-nails rhymes that the East Coast is known for.

If there is one criticism of this album, it is that it's almost retro in its adherence to well-tread East Coast sounds. Dalek adds a few industrial accents to the beats, but a lot of this sounds like it could have been released fifteen years ago. Ditto the rhymes, which are rock solid but don't break any new ground. If you are disappointed with how the East Coast has failed to innovate or keep up with the times, then "The Takeover" might not be for you. That's your problem. The sound Deadverse Massive sticks to is classic for a reason, and I'd much rather listen to this album than a lot of the more contemporary-sounding hip-hop albums out there. The rappers manage to be hardcore without being ignorant thugs, and the beats tread familiar territory while managing to be interesting.

At the end of the day, Deadverse Massive are like a rock band who stick with playing blues-based garage rock when everyone else is dabbling in emo or pop. Deadverse know a good sound, and come off like purists rather than dinosaurs. "The Takeover" is a dense and dark album that is solid from start to finish. Don't sleep on it.