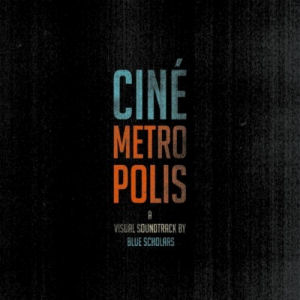 Since their last full-length, 2007's "Bayani," Seattle's Blue Scholars have been anything but idle—they've released multiple short releases, lending some to even suggest that the EP is the most natural format for the duo, and producer Sabzi has continued to build his brand with his other two-man band Common Market. Even still, "Cinemetropolis" feels a long time coming, especially given the continued recognition and acclaim they've garnered since "Bayani." Appropriately, their third LP is their most ambitious yet, billed "a visual soundtrack" and attempting to create the sort of sensually evocative experience that Americans consume through their obsession with multimedia. After short and disappointing tenures with Rawkus and Duck Down, Sabzi and Geologic arrived at the risky move to release it themselves through a fan-funded Kickstarter campaign, but "Cinemetropolis" proves the perfect project for the Blue Scholars to go for dolo.

"Cinemetropolis" is such a ridiculously massive yet overwhelmingly successful outing that it feels like the culmination of years of evolution for the duo. From their inception, the potential for Sabzi and Geo was sky-high, yet rewardingly for their listeners they've grown and improved with each effort. Filipino-American rapper Geologic has long been the more abrasive of the two. Exceedingly rare is the MC with more raw passion than Geo, yet early on his performance was plagued by a lack of microphone presence. Through "Bayani" Geo was so darn serious about his craft that it left a capacity for corniness, leaving the impression that he might be better suited for poetry slam than a rap LP. 2009's "Oof!" EP saw immense improvement on his part as he chilled out a bit, eased up on some of his militant politics, and developed a more versatile flow while maintaining the poetic effect of his words. "Cinemetropolis" continues down this path. He no longer sounds like a Def Poetry Jam refugee, and if anything, he's increased the activist's fire despite eliminating the clunkiness. His verses are meticulously penned, inspiringly powerful, and delivered with the polish and self-assuredness of a veteran artist:

"An American tradition, a narrative for fiction
A Hamilton for tickets, the public is addicted
Just think for a second how much we've been conditioned
To root for the Dough Boys, the O-Dogs, the Bishops
Sided with them villains, in spite of all they heeded
He says She's Gotta Have It, she says she didn't need it
And even if she see it she will prob'ly not believe it
If it ain't bein' projected in a widescreen theater
If it spins on a reel, it's gotta be real
For real, in real life, just reminds of us film
And now you sayin' something's like a movie when it's real
Like a film's much realer than anything you feel"

The fifteen tracks on "Cinemetropolis" bear names of actors, producers, and directors, making cryptic allusions to what lies within. "Anna Karina" is an ode to a latent beauty, perhaps one the likes of the Danish actress and track's namesake. "Marion Sunshine" is named for an early-twentieth century actress but functions as a celebration of summer, belying the album's decidedly serious first half and upholding the concept with its visual lyrics personifying the sun. "Slick Watts" is a Sea-town anthem, shouting out not only a laundry list of the city's neighborhoods but an entire verse's worth of former SuperSonics enough to make me whip out my old books of Upper Decks, poignantly capturing the city's identity crisis since the Sonics skipped town. "Yuri Kochiyama" is a dedication to Sabzi's activist hero, while "George Jackson" assumes a stream-of-consciousness narrative capturing the paradox of art as a business:

"In the future, everybody wanna be an entertainer
So tell me who the fuck is gonna be around to pay us
Tryin' to do us dirty like this shit is not labor
All up in the game and don't deserve to meet your maker
Apparitions of the faces in the crowd
Alarms going off and you can hardly hear the sound
A party in the now, everybody's in the clouds
We ain't fuckin' with the ground 'til our bodies underground
But they walkin' all around like a king without a crown
The bottom's fallin' out, it's gettin' harder not to drown
Economies endowed, people movin' from the town
And you actin' disrespectful like your mother's not around"

Long esteemed as a melodic genius, Sabzi graduates to a new echelon with "Cinemetropolis," which finds him contributing music perhaps even more cinematic in nature than Geo's verses. It's truly surprising that the wild sonic experimentation he employs throughout the record is so uniformly successful, and beyond musical innovation his stereophonic inventiveness is riotously impressive. His deep synths sound otherworldly yet brilliantly evocative as they weave from one speaker to the other, slyly echoing the tempo and bar structures. While mechanical in sound, his instrumentals are in execution full of life, synthesizing elements of world music via African rhythms and Asian instrumentation, assembling sounds from across cultures with others all his own. Musical masterpieces abound: the curious ecstasy of "Lalo Schifrin," the humble beauty of "Yuri Kochiyama," and "Fin," a closing track so appealingly busy it sounds like a percolating anthill at sunrise. The numbingly complex syncopation of his percussion patterns is enhanced by thundering drums, and the effect of Geo's voice over Sabzi's expansive rhythms makes for an often ethereal quality.

"Cinemetropolis" doesn't really play like a celebration of cinema, because it feels like so much more—a celebration of Seattle, of music, of art, and of life itself. Right down to the most unassuming beat and conversational lyric, everything feels epic. With neither standouts nor lowlights, it's such a huge and lush project it's impossible to imagine a label marketing it. "Cinemetropolis" is a vision and potential realized for Blue Scholars, with Geo completing the transformation from a guy who wrote ridiculously dope verses to a bona fide master of celebrations and Sabzi cementing his status as one of hip hop's forerunners. Less personal and more universal than past efforts, it arrives at a sound for their hometown that reflects the city's progressive and worldly citizens. Before I run out of adjectives, I'll just say to peep this, for while the revolution may not be televised, Blue Scholars' will be cinematized.