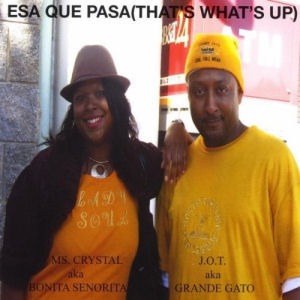 There's something instantly charming about the cover of "Esa Que Pasa." It's a throwback to the 1980's, when rappers would pose on any street corner or outside of any local store and snap a few quick photos for their album, never knowing which would end up on the front and which would be used in the liner notes. It's unpretentious and when I say that it's not cool I mean it in the most flattering way. These are not people dressed to the nines - they're probably wearing the same clothes they would for a casual night out after work. It's also a compliment to say they look more like someone's parents than the hottest rap act going today. Even the lettering on their names looks like a homemade job of selecting and centering typography. After going through dozens of slickly put together albums from major and well established indie labels, coming across one like this in the stack is refreshing.

Regrettably reviewing the album is not nearly as much fun as looking at the cheerful smile of Ms. Crystal and wizened smirk of J.O.T. on the cover. I don't know these people and I like them. I can easily imagine sitting down for a Sunday afternoon meal with them - mashed potatoes and gravy, a meat casserole of some time, green beans and flaky buttery biscuits on the side - or maybe tacos (que pasa). Either way we could enjoy each other's company sipping sweetened tea and talking about the issues of the world, as long as we avoided actually talking about the music they make. For reference I have to go back to my recent review of CStraight's "So Not Cool, a faith-based rap album that I truly enjoyed listening to which I thought showed a lot of promise for both the rapper and the producers involved. Now there's no question the artists here are just as devout and God-fearing. Song titles like "I'm a Lover of God" and "Lord You're All I Need" make it abundantly, possibly blatantly, clear what this duo is about. Unlike CStraight they're not telling stories though, and they're not even delivering biblical parables. Most songs find one refrain and keep on repeating it. Take "Do the Holy Ghost" for example:

There's no point in quoting more lyrics, because they're just random shoutouts like "J.O.T. on the go-go beat," though I think anybody in D.C. would not take kindly to this being called go-go. I'll make two points and I'm not exaggerating on either of them - the first is that I've heard better mixing on a four track and the second is I've heard better "lyrics" from ten year old emcees. I honestly want to slap myself for saying that, because gosh darn it, I look at the cover of this album at these people seem so darn NICE. I have no doubt they're sincere about their faith and their music - after all they wouldn't have gone to the trouble of minting and printing a CD if they didn't think this was good and that quite possibly it would do some good.

Not very. I think J.O.T. was going for a pun (badly) with "I Hit Braincells Like a 20 Dubb Saxx," because there's a saxophone wailing while he repeats the refrain, but the problem is it keeps wailing when he spits a verse and completely drowns out anything he has to say. It's at this point it dawns on the listener that J.O.T. & Ms. Crystal's album cover doesn't just LOOK amateur, it actually IS. These are not professional musicians with a long history of rocking the mic, they are (I swear I'm trying to be nice) exactly what would happen if your mom and dad's friends at the church social said "Hey those kids make rap albums on their laptop computers these days, I bet we can make one about God." And on it goes. J.O.T.'s best track is probably "So Far Away," owing to a decent sample and an uncluttered drum track in the background, though his delivery is hesitant and uncertain. At least this time we can actually hear the words:

"Sometimes I wonder, what's goin down
Me and the Devil battling, yeah round for round
Pound for pound, I hit him TKO
But then act like... oh no
I slip a bit, I feel me falling
To the Lord, yeah I start calling
It seems like, no voice is there
It's gettin scary, I'm lookin every where"

On an album full of 2's and 3's, this song rates a 6, but you'll note that even at his best J.O.T.'s rhyme structure is incredibly bland. If you could put being overly linguistic to the point it's almost annoying (but at least interesting) and under linguistic to the point it's almost boring (but more likely bad) Talib Kweli would be a 10 and J.O.T. would be a 1. I want to flagellate myself for being so harsh because I look at that cover art again and think "Damn these are probably some nice, sweet, albeit incredibly naive people who just want to sell some albums to raise money for their church's soup kitchen." And that's fine, if that's all "Esa Que Pasa" is really up to. The problem is we're not at church bingo right now, we're at RapReviews.com, and that's a different standard. I appreciate the album, I even appreciate the handwritten note on it (and I mean ON THE SHRINKWRAP, which I had to peel off carefully so I could still read it after) but God help me this music is just not good. Please talk to the Godchaserz - they can show you how to give praise while not giving a performance nobody wants to hear. God bless you both.