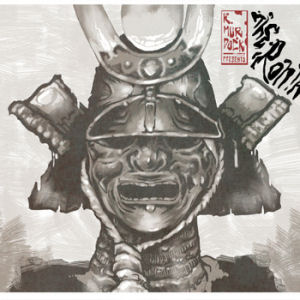 I'm going to defer to the artist in this case and let K-Murdock explain the concept of his brand new "Ronin" EP in his own words.

"Earlier this year, I was listening through a bunch of songs on my hard drive that I had done which were literally wandering around, trying to find a home on some kind of album or project. These songs were dope but being as though I love conceptualizing everything, I decided to make a concept out of the lack of not having one and hence the reference to the masterless samurai of feudal Japan aka the Ronin. The tracks that make up this 7 song EP were recorded over the last 3 years and each feature a unique emcee and sound much like the rag-tag but formidable group of Ronin samurai of one of my favorite stories- Akira Kurosawa's Seven Samurai, which was adapted a few years ago into one of my fave anime series."

K has always been a dope producer even when he's just dropping his own instrumentals, but it's often the act of pairing with a dope emcee that brings out the best he can do. Whether it's Raw Poetic or Mega Ran just to name a couple, you can always expect the beats to be the equal of the rhymes and enhance their interesting lexiconic qualities. We can happily report that "The Ronin (EP)" follows that same trend, and also features familiar rappers like Braille blessing those beats. You can check out his contribution on "Carnival":

"Upside down, I need to get my feet under me
It's been ten years and, I keep wondering
Where will I be after the next one passes
Maybe I should get my eyes checked for glasses
But I've seen scientists with microscopes
who still don't have vision, for future living
This world is a maze, I continue to move in it
As it changes, society moves with it
New inventions, new medicines and new gimmicks
Headlines and newspapers print it
They talk about who's losing, and who's winning
Struggles from the past, some get a new beginning
Some never recover, once they go under
Some learn from mistakes and come back with more hunger"

Braille Brizzy does a fine job on his bars, as do all of the emcees that join K on this concept EP, but since even he will admit their reason for inclusion is rather random I tend to dwell more on the beats to the rhymes for this short seven song 25 minute long release. "Pieces" is a spartan track with some clear anime and video game influences, taking a deliciously understated drum track and carefully applying the watery sounds over the top. "The Wu-Tang Joint" lives up to the name, sounding like something bouncy brassy and horny that you could find the likes of Ghostface and Rae spitting to. "1-Hit Wonderful" starts out like a drum track from the 1980's, then completely changes gears and becomes a lushly orchestrated melody with background singers softly cooing "ooooh-oh-ooooh," then shifts up AGAIN leaving you in more awe than Bruce Lee going up Mt. Fuji in a movie. To bottom line this all too short release, "Ronin" is yet another solid effort from K, who has found he can even turn a complete lack of a theme with unused leftovers into a delicious bento box of hip-hop.