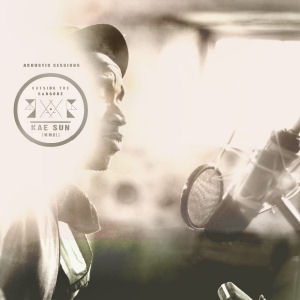 Ghanian born Kae Sun quietly started to make some noise in 2010 with the release of "Lion on a Leash." He was not intimated by the cold climate of Canada - he still had plenty of heat for the mic as both a singer and emcee. That's something I had noticed myself when listening to various URBNET downloads and compilations. I'm sure I even wrote on Twitter at some point that based on what Kae Sun had done, I was looking forward to his future projects. As evidence for my belief that this took place, and/or that I must have even heard back from him about it, I checked my account to see that I am already following @KaeSun. Therefore I'm sure I'll drop him a line about this review too.

Now whereas I may have been impressed with his rapping in the past, I did mention the singing in the opening paragraph, and Susan 'susiQ' Kim made sure to make a point of it in her review as well. The reason I'm making a note of this right here and now is that I had hoped to hear some rapping of any kind from the talented lyricist on "Outside the Barcode," but the title of the release should have been my first clue I wasn't going to get what I was looking for. He's not only outside of Canada, he's pretty much outside of hip-hop on this one. That's not a bad thing in any way, and I'll tell you why. I've spent many a review on this very website praising the multi-cultural African diaspora in the music of Haitian hip-hop legend Wyclef Jean, and over the years I've stuck with him even when at times he's seemed more like a world beat artist than a rap star. For that same reason I can dig where Kae Sun's coming from on "Outside the Barcode." Like Wyclef, he wants to broaden our musical horizons. Even on his "Interlude" he sings "distant lands, they don't mystify me." Listeners will no doubt feel the same way digging his internationally soulful vibe.

Now to say this (free) album will be for everybody reading this review or coming to RapReviews.com is a stretch. The closest he gets to a "rap" on any song is on "Weh-Weh," but in truth he's just singing at an uptempo face with a beat clapped strongly enough that you could tap your foot or bop your head to it. More of the album is like "Firefly Dance," featuring a quietly strummed guitar and Kae's lilting Ghana by way of Canada accent singing along with thoughtful lyrics about his life and cultural roots, and how those things interact with his larger experience. "It's a long long way to journey/and I know you'll soon be returning/so keep that dust up in your hair, don't let it sink or grey and disappear." You can get a very uplifting and soulful feeling from these songs, but you can't get much of a hip-hop swagger or attitude from them. I mean this as both compliment and fair warning to the listener - Kae Sun's "Outside the Barcode" can best be summed up as a cross between Bob Marley and Michael Franti. I dig it, but it may not be for you.