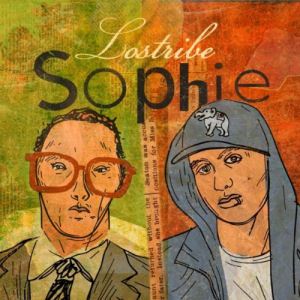 Peep this list of artists: Casual, Gift of Gab, N8 the Gr8, The CUF, and The Grouch. If you said or thought "West coast underground hip-hop" you're on the right track. In fact on Lostribe's "Sophie" could in some ways be considered a compilation album for all of these often critically acclaimed yet commercially overlooked artists. For many hip-hop heads, that alone would be a purchase point, but the truth is many compilation albums with equally impressive line-ups also tend to get overlooked and languish on store shelves.

Agustus ThElefant and producer JustLuv have something different in mind for Lostribe. The latter is a fixture of California's rap scene who has a resume other Cali producers would be envious of, working with everybody from Mistah F.A.B. to Mac Dre to San Quinn. The former is an up-and-coming emcee from NorCal who first collaborated with JustLuv and another producer named MLB back in 2005 on "Sole Expression." They were buzzing at just the right time to get invited to score the Afro Samurai

That achievement would be enough for many independent rappers who aren't as mainstream as Eminem and Nas, but neither JustLuv nor Agustus was satisfied to sit back and cash Namco's checks. Though MLB is described as being "on a brief hiatus" from Lostribe, that doesn't stop the two main men being discussed here from collaborating. They've known each other since high school and always kept it cool even when working on different things, something the press release with this album chose to emphasize. I on the other hand would like to emphasize "Gettin Back," a song which has some crooning from Deja Solis which otherwise serves to spotlight what Agustus and JustLuv can do. The latter's melody is a pleasantly harmonious mixture of pianos and drums to set the mood off right, while the former's rap is a refreshingly personal life narrative. This is what "keeping it real" is really about:

"Mom was in the kitchen cookin chicken when the bell rang
Dad was in his study but he strummin on a 12-string
That ain't simple, just a little dap or lat' at least
Listened to my daddy's music, chewin through an apple seed
Soon everything would vanish - where the pieces fit?
Daddy split, didn't speak, a weak kid needed therapists
Careless; Ricky was my buddy from the 6th grade
Thick blood, my big brother, others bitch made
Shit changed, and his daughter is his life now
But it's nice how, when we kick it it's the same
Ain't it funny how your baby is your sunbeam?
Now you feed her like you makin somethin out of nothing
That's when you plant to seed and everything you need to know
What it takes to be a man, to understand the need to grow"

What Agustus is "Gettin Back" to in this song isn't just another "Be a Father to Your Child" narrative, though it does contain elements of that format. The song's goal is to get back to what's important to the emcee - friends, family, his roots, and the things he cares about the most in the world. There's not any hint of pretentious posturing or braggadocious flossing in these words, which makes the partnership of Agustus and JusLuv all the more interesting. A lot of the artists JustLuv is best known for working with are known for their West coast extravagance, ghost riding their whips, and just how hyphy they can get. Agustus is a complete change of pace from JL's normal routine. That's not to say one has more value and the other has less - each has their own place in the hip-hop diaspora - but it's not what people who know JustLuv would expect.

On the other hand I suspect anybody who knew of Agustus would definitely expect his thoughtful, insightful and intelligent raps. If I had to compare him to anybody I'd break him down into thirds and make one part Aceyalone, one part Del, and one part Zumbi from Zion I. I'd like to consider it a coincidence that all three examples are from the West coast, but it's far more likely there's just something naturally Cali about a certain open-minded approach to lyricism and flow that all four men fit into. The same can be said for JL's production, which I think the press release mistakenly typecasts as "electronica." That's not how I feel listening to the progressive hip-hop sound of "After the Lights On" featuring The Grouch, the pounding kick beats of "Come Down" with Casual, or the smooth grooves of "Breakup Song" featuring Gift of Gab. This is just good hip-hop.

"You got jokes? Stop, you just spittin drama
Put on some Sarah Vaughn and share some marijuana
But you wanna start a gimmick, part of image and persona
Swearin, dissin women and embarrassin your momma
For the stars, or the scene that they cause
And shorty had heart, the laws of gravity was battlin odds
And it's hard, when nobody applaud
Because the music never bought the newest Nauticas..."

The quotes from "Boombox" above show that Agustus isn't just out to make a hip-hop album, or even a compilation where he works with all of his favorite California artists, he's out to challenge other rappers who think they've got to play a role or portray a stereotype to get recognition. The music of Lostribe will at the very least get that recognition here, though I have to admit there are occasionally times when a little more boom bap could have taken this album even further, and times when Agustus diction wasn't as clear to the ear as I would have liked. On the whole though "Sophie" is exactly the kind of album that I enjoy listening to, and I suspect that even if you weren't already familiar with the slew of guest stars they put on it, this might be your kind of album too.