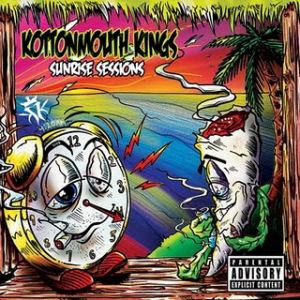 If Proposition 420 completely decriminalized marijuana in Cali tomorrow, the Kottonmouth Kings would be the first to stand on the capitol steps in Sacramento and light a big fat joint to celebrate. Their advocacy is self-declared in their name, describing one of the most common side effects of a medicinal toke (or so I've heard). If that wasn't clear enough, their frequent use of green colors on their album covers would be a good hint, and if that wasn't clear enough song titles like "Ganja Daze" and "Stay Stoned" would be a good hint. Oh wait, these pot tokers still haven't been BLUNT enough to get their point across? Seriously, after over a decade of decadence it's hard to imagine anybody could miss their point, but if you still haven't gotten it the opener of "Sunrise Sessions" makes it abundantly clear. You're all cordially invited to take a vacation in "Stonetown":

If this review is your introduction to the Kings, there's one other thing you need to know besides their pharmacological propensities - they are pioneers in a self-described "rip rock" style of hip-hop. Songs like "Kalifornia" exemplify this vibe, a cross between hip-hop, Southern guitar blues, and Midwestern metal. Close kindred to the Kings musically include the likes of Everlast, Big B, Hed PE and Vinnie Paz. Individually none of these artists would sound the same as the Kings, but collectively you can hear a little of them all through a Kings album. Take the crooning from Everlast, the heavy rock of PE, the guttural gruff caucasian rap delivery of Paz and the energetic performances of B and they all combine. Occasionally they drift outside of this comfort zone and bring in even more diverse influences, such as the Carribean and dub reggae feel of "Boom Clap Sound" and "She's Dangerous":

More often than not though they drift toward a sound that's a cross between rapping and singing, much like the genre bending musicians from Rehab. There's not much to worry about in their stoner life, cause everything's gonna "Be Alright":

"I said everything's good in this beautiful life
And today's the day, you know it shines so bright
Only time to love and never no time to fight
Let's all get together and enjoy the life
We doin big thangs, and the stakes are great
We on the redeye flight, erase all the hate
There's no better place than this right now
And there's no better time than in this town"

There are times on an album like "Sunrise Sessions" where the Kings veer a little too close to becoming a parody of themselves, expressing the self-indulgent values of a middle class suburban stoner with nothing but time to kill and a bong to hit. The middle class as we know it is rapidly vanishing in 2011, so what may have been a carefree existence in their earliest days is now a toke that comes from their hard work just to make a living. Therein lies the rub - they've perfected the art of sounding like it's all good and it's just a "Stonetown" paradise everywhere they go (where cops would rather smoke with you than arrest you) but if they weren't prolific recording and touring artists they wouldn't be enjoying the fruits/buds of their labor.

Perhaps then in the end "My Garden" off "Sunrise Sessions" is a good song and metaphor for this group - everything they do (or smoke) is carefully cultivated. It might sound like a frat party at times, but like all Kings albums, it's a well produced and largely inoffensive one. Perhaps a bigger shame than the fact marijuana hasn't been decriminalized is the fact most people can't afford to live the lifestyle of these royal Kings. Your "Sunrise Sessions" may just be vicarious ones, lived through KMK's tunes, but smoke 'em if you got 'em.