:: Bern One Entertainment/SMC Recordings
as reviewed by Matt Jost 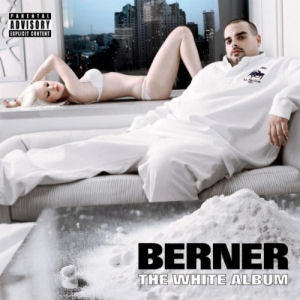 Out of thousands of rappers on US soil Berner stands out to me. Why? There is something about the San Francisco representative that makes me relate to him on a personal level. It's not the hustle ethic. It's not the laid-back demeanor. It's not the skin tone. It's something purely trivial and accidental but maybe not entirely pointless. You see, I'm Berner too. Let me explain. The way someone who is from New York is a New Yorker, I am a Berner - a resident of the city of Bern, Switzerland. Counting the accompanying Swiss state of Bern, that makes one million of us. Berners, that is. In my language, citizens of the Canton of Bern have been known as Berner(s) for, well, about 500 years. In English you'd correctly call me Bernese, but it doesn't quite have the same authentic ring to it. After all, the Berner Muenster (cathedral), the Berner Zeitung (newspaper), the Berner Kantonalbank (bank), the Berner Sport Club Young Boys (football club), and the world-renowned Berner Sennenhund (Bernese Mountain Dog) are all part of where I'm from. What's more, a co-worker actually calls me Berner in jest since I identify strongly with my hometown. So naturally, as a born and bred Berner and also longtime rap fan, I considered it my duty to check out this rapping Berner - keeping in mind that I've heard dozens of MC's who have every right to refer to themselves as Berner by the definition given above.

I did so last year with 2009's "Weekend at Bernie's," and found Berner to be entertaining enough to keep track of his output. "The White Album" sticks to the formula of contemplative coke raps over soul-pop-influenced hip-hop beats. Bern enlists veterans like San Quinn, Young Noble and Yukmouth but also shows he is in touch with the times by featuring Big K.R.I.T., Wiz Khalifa and Smoke DZA. In terms of an image, he presents himself as your friendly neighborhood drug dealer, managing to not come across arrogant despite boastful lyrics. Like the latter, Berner's vocal tone is a peculiar mixture of matter-of-factly and epic.

The listener gets hit with a full dose of that combination right as he goes into "The White Album." Opener "White" is a classic come-up tale set to stuttering drums and chopped vocal samples. Hiding behind a stereotypical title, "Car Full of Killers" asks existential questions. Although he is a relative newcomer, Berner does old-style, reflective street rap where the criminal lifestyle is never without repercussions: "Dope dealers with two strikes / that'll do anything to start a new life / but their old ways haunt 'em like a bad dream / house full of leather couches and flat screens." Berner and his characters are suspended between living it up and being down and out. They live a fast life where death always lurks around the corner. The 2Pac influence is evident (and acknowledged by the artist himself), although Berner is far from the accomplished artist Tupac Shakur was. Also, he is much too relaxed to make a line like "Militant minded, spittin' out napalm" (from "No Middle Man") sound credible.

Nevertheless, Bern is comfortable in his niche and can pull in a cool feature (Killer Mike on "So Cold") or fly beat (the Cory Mo-produced "Flyest Shit I Ever Smoked" recalls the heydays of Baby Bash) anytime. The overall tone, however, remains practically the same until track 7, when Big K.R.I.T. brings out guitars, strings and organs for a anthemic beat while Houston's Killa Kyleon provides an engaging hook and verse, making "For a Livin'" a highlight, also casting a light on Berner's simple but effectively delivered do-or-die philosophy:

"When I die hope I'm forgiven
cause in these streets we live in
it's either death or prison
I never take a day off
We be gettin' weight off
Out of state hustlin', I never had me a day job
When that plane take off
we be shippin' lley off
Never been a middle man, always been a straight boss
Cats be tellin' nowadays, so I be watchin' who I hang with
Big Meech, Larry Hoover, I be on that same shit
In the drought kick back and watch the caine flip
Breakin' bread with the same clique that I came with
The only thing on my mind - to make a killin'
I came up broke, nothin' was given
I do this for a livin'"

K.R.I.T. returns to the boards for "Yoko," a Far Eastern-trimmed smoke session that has Bern, Wiz and the King himself hallucinating about a femme fatale they choose to call Yoko Ono. Then it's back to the sped up soul vocals, melancholic melodies and lyrical coke-rushes with able producers such as Cy Fyre, Biggz, PakSlap, Goblin and Maki.

Deviating from the formula are the blunt "Life That We Love" with J-Dawg and Rydah J. Klyde, which sounds like something the Regime recorded a decade ago, the rather sappy "Yeah Daddy" and the closer "Carry On" featuring reflective verses from San Quinn, Cozmo and Berner, who sums up his approach with the rhetorical question "What's success without the struggle?"

All that is good and well, but if coke is mentioned in nearly every song, even when the focus is on women ("Liking How She Fuck", "How it Goes"), and even when Bern dwells on personal tragedies ("Anymore"), cocaine may just take up too much place in your art period. Berner undoubtedly possesses emotional depth, but unfortunately not (yet) the artistic range to go with it.

At the beginning of this review I bothered you with some coincidential connection I have with Berner just about anyone couldn't care less about. But if you've followed rap music just a little bit you've surely been in similar situations where you responded to some unimportant detail. But then you eventually see beyond the randomness, the looks, the names, the gimmicks, the gossip, to discover what the artist in question really has to offer. In Berner's case, there are definitely aspects about what he does that I deem interesting. But from one Berner to another, I have to be frank and say that 18 tracks full of that white and that green do not yet a dope rap album make.