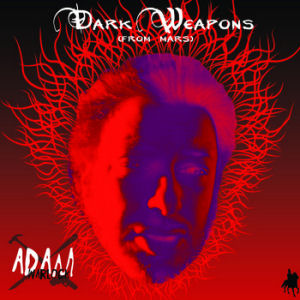 If the name Adam Warlock seems immediately familiar to you, it's not because you've heard this album before, it's because you're a reader of Marvel Comics. Adam Warlock is a Stan Lee creation who made his debut in an issue of Fantastic Four all the way back in 1967, who has played a prominent role in storylines spanning multiple areas of the Marvel Universe in the decades since. The entire back story is entirely too convoluted so I'm not going to go into it here - it's easy enough to look up online if you like. The point is that instead of coming up with a completely original nom de plume for his debut EP, Adam Warlock chose one that was immediately and easily recognizable so that his EP would get more attention.

To be fair though he's hardly the first - rappers name themselves after real and fictional men all the time. It's not like there isn't a Noreaga in hip-hop, named after Manuel Noriega, and his partner Capone is named after Al Capone. On the fictional flipside, MF DOOM is named after Victor von Doom, coincidentally from the Marvel Universe. So yes this shit happens all the time in the world of rhyme, but if you're going to take the name of somebody famous who happens to be fictional you're (A.) taking your chances the owner of the name won't sue and (B.) better hope that you don't suffer in comparison to someone who doesn't even exist in the real world. It's a fairly risky proposition therefore to come out as Adam Warlock.

And unfortunately, I hate to be the bearer of bad news, but this Warlock does indeed suffer compared to his compelling counterpart. It's not that there weren't good reasons for Adam to record this album - his bio (which we'll just take at face value as on the level) says that he and his wife were victims of a break-and-enter, leaving them psychologically scarred and picking up every item in the house to use as a weapon every time they heard something go bump in the night. Rather than live in constant fear, Adam chose to channel those pent up frustrations and emotions into an album with instrumental backing from his friend and producer Nasa. Good for him. Bad album though. "Chain Lockin'" is a mess. It's exactly like the kind of Kool Keith song that drives me nuts, even though I have the utmost respect for Keith Thornton. The beat isn't very coherent, and the random noises and breakdowns thrown into it don't help, and there's the barest minimum of a rhyme structure being followed - more than Keith rapping about smearing feces on the wall but not by much. Maybe Dr. Octagon was the one who unhinged Warlock to begin with.

Things don't get better on "Slugging Percentage," which based on the premise of the album is the next thing Warlock grabbed to use as a weapon - a Louisville Slugger. The lyrics are better, but the music is actually a little bit worse. It's not enjoyable - it's just a warbling pile of noise for Adam to spit bars about splitting trees, protecting his wife and his life. "Serpentine Steak Knives" - well I guess that's the next item a homeowner might be tempted to grab during a B&E. My guess is that would be a bad idea, as the robber would be likely to turn it around and use it on you. At least there are cameos from Subtitle and Elucid here, though they're handicapped by the same problem plaguing Warlock all along - a beat I have no desire to listen to again after playing this song the first time.

"Drop the Hammer" is a mixture of electronica and minimalism that will fail to satisfy fans of either, ultimately resulting in a cacophony of noise whose only benefit is that it is understated enough to let Warlocks's flow come across clearly. Then again this is the fifth straight song about how he wants to deal with a burglar, and even though his pain is real the subject matter is by this point pretty tired. "Pound in a couple of nails, it's Home Depot/proofin my home against unknown evil." Dude, we get it. The only one that doesn't seem obvious as a weapon or a tool is the closing track "The Missing Amethyst," but presumably that's the prized possession that the robber made off with. Unfortunately this is musically the least enjoyable song production-wise, and just ends this EP on a really sour and dour note. I'm not trying to make light of Adam's pain in any way - being a victim of crime sucks - but after listening to this I feel my ears have been victimized too. Maybe Adam Warlock is capable of better when he's not suffering from post-traumatic stress, but after this I'm not enthusiastic to find out.