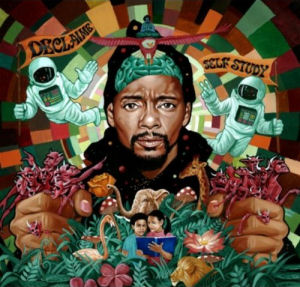 Whether you call him Dudley Perkins or Declaime matters not - the Oxnard, California native is funky as a mo'fo. Oxnard might not be the first place that comes to mind when you think of California hip-hop meccas, but when you realize that Madlib, Oh No and DJ Babu hail from Oxnard too, perhaps you'll change your mind. The hallmark of Declaime's career throughout the years has been his iconoclastic nature, making him a West coast equivalent of DOOM, down to the flows that seem to change at random and the topics that seem to spring forth into raps in a stream-of-conciousness manner. This has earned him a dedicated cult following which creates a sustainable level of income, yet causes him to be overlooked for radio play in favor of the likes of Kanye West and Lil Wayne. In no way should that be considered a knock on him or them, it just highlights Declaime's highly intentional choice to not make music that formats well into urban contemporary airplay.

"Self Study" proclaims itself both visually and artistically to be an introspective look into Dudley Perkins, the man behind the name Declaime, although it seems to this writer to be more of the same we've heard from him his entire career. Again this is not a bad thing nor is it bad news - Declaime's flows and tracks definitely stand out from the rest of his peers. Backed by his long-time friend and collaborator Georgia Anne Muldrow on production, Mr. Perkins is free to tackle any subject that's on his mind, and in the process spark the minds of his listeners to think objectively. At times it's far from light fare - in fact "Coonspiracy" could be said to be downright heavy. Hip-Hop needs a song like this though, to cast an eye inward on itself, as opposed to having outside forces dictate what is and isn't culturally and musically acceptable:

"Only lame ducks hate on the D
And all them real humans can come follow me, like Twitter
Never been a quitter, real rhyme spitter
Never back down, hold my own ground
against all opposing foes, for this ain't friendly fire
This that that real black, pickin afros
'Bout to take you higher
like dummies sniffin coke up they nose, y'alls funny
Like so-called pimps and they sleepwalkin hoes
Get that money is all a brother knows
Fast cars, and expensive clothes
All slangin rock on the block prayin not to get caught
Whoa! Hold your horses
And act like your momma taught you or brought you up better"

That last line from Declaime is so fresh I'm gonna repeat it again: ACT LIKE YOUR MOMMA TAUGHT YOU OR BROUGHT YOU UP BETTER. Hip-Hop does need a healthy balance, with the creative and intellectual forces like Declaime there to counteract the "pimps and hoes," but unfortunately it's far from a 50/50 split - and that's the "Coonspiracy" that Declaime is decrying. You can agree, you can disagree, but at least when you hear the song, you'll think about it critically. In case you believed Declaime was laced down and super serious, there's plenty of fun to be found on the album too. Prince Po of Organized Konfusion fame joins Declaime and Illicit Da Konvict for a bopping hip-hop track filled with "Illicit Fonk." On "Quartz" Perkins declares "this is real life, not an act/I walk so different" but he also walks it with an uplifting ebullient spirit and is joined by Muldrow for the vocals. LMNO also drops in for a spell to get fluid on "Movin," and Kev Brown drops in as a guest as "East Meets West."

Now with all that "Self Study" has going for it, there are times that you'll feel a little studying goes a long way. "Zoom" featuring M.E.D. a/k/a Medaphoar seems like it could be a fun diversion, but then Declaime gets as heavy as cancer and declares that "sleep minds stay clouded, until you're dead in a hearse." Ouch. "Dirty Dude" is even more sharp and biting, portraying the role of a crooked cop at his most wicked, without the humorous relief a similar track like Cypress Hill's "Pigs" can offer. Even on "Perfect (Git a Taste)" you get the feeling from Declaime it could be "Coonspiracy Part II," and at some point you begin to feel Mr. Perkins spent so much time studying that recreational activities unnecessarily fell to the wayside. It ain't all serious all the time, but it's probably as serious as he's ever been in his career if not moreso. And while working exclusively with Georgia Anne Muldrow may be lyrically liberating, it can also at times be musically stifling - some Oh No or Madlib beats would really have freshened things up. "Self Study" is a fine album in the Declaime/Dudley Perkins catalogue, which like so many of his albums will be greatly appreciated by his cult fans and not by the mainstream masses.