CSC Funk Band :: Things Are Getting Too Casual 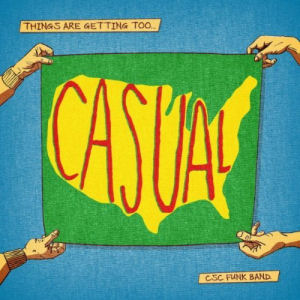 CSC Funk Band are the latest in a decade-long revival of live funk and soul bands that includes Menahan Street Band, the Budos Band, El Michels Affair, and Antibalas. Many of these bands and musicians are affiliated with Daptones Records, whose Dap-Kings have backed the late Amy Winehouse, and currently back soul singer Sharon Jones. The impetus behind this wave of bands seems to be hip-hop crate-diggers asking, why don't we make music that sounds like these classic funk and soul records we are sampling?

CSC Funk Band are also the first funk project for legendary New York hip-hop label Fat Beats. I can't help but wonder if this is a sign of the times. Stones Throw on the West Coast has been moving away from straight hip-hop towards funk and soul acts like Dam-Funk and Mayer Hawthorne, and I wonder if Fat Beats is looking to go in that same direction. Maybe as the record industry changes and hip-hop fans age these labels have discovered rap music doesn't offer the same return on investment that other kinds of music do. Or maybe it's just a sign of the blending and blurring of genre lines. Or maybe the labels are looking for music that their hip-hop artists can sample without having to pay an arm and a leg in royalties.

CSC isn't a straight retro throwback, however. There are moments, like lead single "Caneca," where they cook like James Brown's backing band circa 1973. However, they immediately start mixing it up on "We Don't Care," throwing in elements of salsa and psychedelic rock, and getting much noisier and looser than James would have ever allowed. Founder and lead guitarist Colin Langenus has a background in New York's noise-punk scene, and there are noise elements to what CSC does. Songs descend into moments of cacophony, with all of the instruments competing to make the biggest racket. There are blazing guitar solos, and the album ends in a ten-minute long jam, "Old Motel."

These noise elements might be interesting, but more often than not they harsh the vibe rather than add to it. "Fiesta" is much stronger when the musicians all dial back and ride a consistent groove, and straightforward funk tracks, like "Bad Banana Bread," were the highlights of the disc for me. Also, despite the addition of rock elements, they never quite reach the same heights as "Maggot Brain" era Funkadelic.

"Things Are Getting Too Casual" is an interesting album that is worth checking out. I appreciate CSC Funk Band's mix of funk, salsa, noise and prog rock. While it didn't always reach the heights I wanted it to, I enjoyed this album, and hope to have the opportunity to check out their live show.