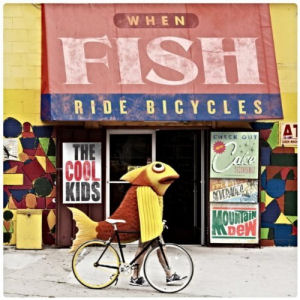 It's easy to forget that, despite their 2008 EP "The Bake Sale" and several subsequent mixtapes, The Cool Kids did not release an official album until just a month ago. This is due mainly to the fact that "The Bake Sale" had the depth of a real album, catapulting the duo into the spotlight and introducing the hip-hop game to their unique production style featuring sparse, percussion-heavy instrumentals. I myself was worried, though, that a label switch to Green Label Sound meant that the group was selling out for its debut LP and sacrificing the authentic feel of "The Bake Sale" for a more mainstream sound. And at a quick glance, it might seem as if this the case, with a slew of guest emcees and production credits from Pharrell and Travis Barker. Fear not, though, as "When Fish Ride Bicycles" strikes a balance and manages to stay true to The Cool Kids' roots while delivering a slightly evolved, more polished sound that makes for an entertaining listen throughout.

The album starts off with more of what fans of The Cool Kids have come to love, and the opening track, "Rush Hour Traffic," features a simple kick and snare pattern along with a short, pronounced synth and a slow electric guitar chord. The track is a near perfect complement to the steady, laid-back deliveries of Mikey Rocks and Chuck Inglish, and it feels as if nothing has changed over the last three years. "Bundle Up" follows suit, with little more than a punchy kick and quick snare drum and an plucked electronic synth to drive the track. And "GMC" is another example of how Mikey and Chuck can transform a beat that might sound overly simple and empty on its own into an instant hit, with their drawn out, clearly articulated lyrics. The Cool Kids clearly recognize what works best for them, and while several other tracks on the album have a more fast-paced, new-school feel, the foundation of "When Fish Ride Bicycles" still lies in the old-school style that made "The Bake Sale" such a success.

Of course, The Cool Kids have come a long way in the past three years, and their growing status in the hip-hop game has allowed them to land guest appearances from the likes of Bun B and Ghostface Killah, among others. I was slightly skeptical at first about how the two hip-hop veterans would fit in with The Cool Kids, and I was worried that Mikey and Chuck would be overpowered by the star presence and would end up taking a back seat. This couldn't be further from the truth, though, as duo holds their own on both tracks, showcasing their lyrical creativity and ability to switch things up to match the beat. "Penny Hardaway" features a blend of piercing synths, orchestral strings, and soft piano keys, and it appears as if Chuck, who produces the song, has taken a page out of RZA's book. Ghostface spits a vicious final verse, and his gruff, hardcore delivery fits right in and offers a refreshing contrast to Mikey and Chuck's lyrical style. "Gas Station," on the other hand, is reminiscent of an old UGK song, with its faint high-pitched whistle, deep rumbling bassline, and Dre-esque paino keys, setting the stage for Bun B's opening verse. The Cool Kids step to the mic second, and it's almost scary how well Mikey and Chuck adapt to the smooth, easygoing instrumental that sounds like it's straight out of the south.

The Cool Kids continue to switch things up on tracks such as "Swimsuits" and "Summer Jam," which both pick up the tempo and have more of a party-rap vibe than the rest of the CD. The former features a Caribbean-style drum loop, a brassy bassline, and a pop-like chorus from Major Hawthorne, giving the song an upbeat and radio-friendly feel. The latter, one of two songs on the album produced by Pharrell, pits a flowing jazz piano over a soft drum pattern and a funky bassline, and "Summer Jam" truly lives up to its name. There is no denying the feel-good vibe and catchy lyrics of both tracks, and Mikey and Chuck are once again able to switch up their flows accordingly, but it remains to be seen how longtime fans of The Cool Kids will feel about this deviation from the norm.

In the end, there's no denying the fact that "When Fish Ride Bicycles" is a promising debut LP and a solid follow-up to "The Bake Sale." The album builds upon the sound that made the duo's 2008 EP such a hit, adding a little mainstream flavor without sacrificing much in the way of lyrical content or authenticity. True, there are one or two songs that seem a little out of place, such as the more fast-paced, club-oriented "Get Right," but for the most part The Cool Kids stick to the formula that works best for them. Perhaps the album can best be summed up by a quote from Mikey I came across while searching for the meaning behind the bizarre cover art -- "I don't want to be taken too serious." The Cool Kids don't want people debating over the underlying message of every song, picking apart and arguing over every little lyric. Rather, the duo wants listeners to simply sit back and enjoy the ride, and those who do so will almost certainly not be disappointed with the often quirky rhymes and unique production from Chuck and Mikey.