Jellyfish Brigade :: Gills and a Helmet 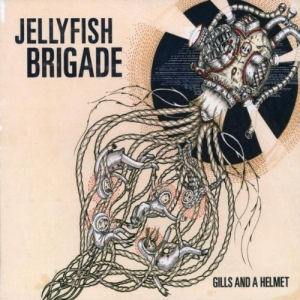 "To all my fellow baton twirlers
I think we gon' need some gills and a helmet
to survive this one..."

Step back with me into the early to mid-1990's. Imagine yourself at a college radio station in those days, receiving dozens of packages a week (sometimes that many in just one day), each from a record label trying to shout their artist at you more loudly than the other. Names like Toad the Wet Sprocket, Weezer, Jon Spencer Blues Explosion and Skunk Anansie are interesting for a while, but about a thousand promo singles and vinyl twelve inches later, you become almost numb to anything the music industry can throw at you. The artists have to know at some point they can't create a name whacky enough for you to care based on name alone. Nevertheless that doesn't stop the labels from promoting Tool, Luscious Jackson and Therapy? to you. At some point even Blur becomes a blur, and it all just gets catalogued as fast as you can go without even thinking how whacky it is - because it's really not any more.

To receive an album like Jellyfish Brigade's "Gills and a Helmet" in the mail is to be transported straight into that alternative rock heyday, even though the group professes to be "hip-hop, folk, electronica, and R&B." They've got the whacky name, the conceptual artwork to go with it (with a bunch of hapless humans tied up in sci-fi tentacles) and this group even included a full sized poster of said artwork. The only things missing in the package are a bunch of stickers that invariably get slapped on the cabinets and trash cans all around you and a t-shirt size medium that not even your callers can fit into if you give it away on air. As much as this didn't work for me in the 1990's to the point even good bands started to blend together, it's a bit of a twist that by going retro with the name and packaging it actually DOES catch my attention in 2011. It's perhaps telling that the group is from Portland, Oregon given that so many successful alternative and hard rock groups from the early 90's all hailed from the Pacific Northwest area of the country.

Vocals (rapping or otherwise) on this short album are provided by Lucas Dix. All of the production for Jellyfish Brigade is handled by Jeffrey Acciaoli. And since I've gone out of my way to talk about the artwork sparking nostalgic memories, let's give a shout out to illustrator Jason Graham too. The opening song "Kerosene & Fireflies" relies largely on kick drums for its beat, then layers organs, synths and sound effects on top in what would be a cacophony of noise in the hands of a less skilled producer. Thankfully Acciaoli manages to make the disparate elements sound like something of a melody, even if it's more of a new age song where discrete notes are not as important as warbling sounds. You could call it "Hearts of Space meets Hip-Hop":

Lucas Dix is a capable enough rapper, with a style vaguely reminiscent of the flow you'd hear on a Styles of Beyond or Linkin Park album. While the breath control keeps him on the beat and the diction is mostly understandable (except where the music drowns him out) there's nothing overly memorable about his rap. He's not exceptionally emotional in his delivery, he's not telling utterly fascinating stories, and you won't be blown away by punchlines. The music is really the best part of these messages - the video game influenced "Chasing the Shine," the reverberating watery echo of "Well Dwellers" and the slow electronic gait of "Tremor Dancer." To be honest I probably would have enjoyed this album with or without Dix, which is not to say that he's not capable of being compelling, but that Acciaoli is clearly the star of this team in its debut release. Can this two man Jellyfish Brigade survive the ocean of the music industry? Perhaps. For what it's worth all those whacky names I quoted in the opening paragraph were bands who went on to sell millions of records - hundreds of others with equally oddball concepts aren't even memorable to me today. These 2011 JB's +may+ be survivors too.