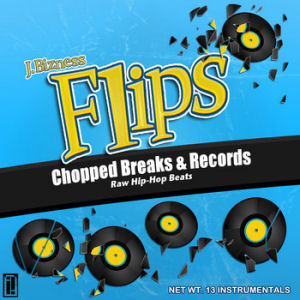 Any rap aficionado knows that sampling is one of hip-hop's oldest traditions. Despite legal attempts to stifle sampling after its explosion in the late 80s, with groups such as Public Enemy and De La Soul leading the way, it continues to be an important part of hip-hop culture. Artists today sample everything from electronic to classical music, but the heart of sampling in hip-hop lies in soul and jazz music, which producers sampled, chopped, and flipped to lay the foundation for hip-hop's golden age in the early 90s. Unfortunately, mainstream hip-hop today tends to favor a more generic sound, while the authenticity of sampling persists within the underground community. It's always refreshing to hear a producer who attempts to recreate the old-school sound of hip-hop through sampling, and thus I was intrigued to see what J. Bizness's instrumental album "Flips" had in store.

The album's concept is simple; as the name suggests, J. Bizness takes a sample and then flips it, chopping it up to create new sounds and splicing the pieces together. What's interesting is that each track includes about 15 seconds of the sample itself before transitioning to the actual song, allowing the listener to better understand how J. Bizness works to build the finished product. If you're someone like me who loves investigating where artists get their samples from and how they manipulate them to create a beat, this is an enjoyable addition to the album.

Even with the samples at the beginning, though, most of the tracks are around 1:20 in length, meaning that there simply isn't much time for variation within each beat. While there are certainly some creative uses of samples, it would be nice to see J. Bizness take more time to expand on the instrumentals and create more complete tracks. What's more, when it comes to the percussion, it seems as if J. Bizness is content with a standard, one-two drum pattern for most of the songs. This works for the tracks where the drums take a back seat to the other instruments, but there are several instances where the snare and kick simply overpower the rest of the beat, making it hard to focus on the sample itself. "Gotchu," for example, starts out with a mellow jazz piano that floats across the track, only to be broken up by the harsh, disrupting sound of the snare hit.

This is not to say, though, that "Flips" is completely lacking in quality instrumentals. "Fus" samples a song that sounds like something straight out of the Middle Ages, with a high-pitched whistling flute and an acoustic guitar pluck that J. Bizness chops up and lays atop a hard-hitting drum pattern. The samples also flow well together on "Dionne," with a crooning trumpet and a short female vocal sample that make for one of the smoothest tracks on the album. On the flip side, there's the head-bobbing "Gold," with a punchy snare drum and both pulsing and sweeping orchestral strings meshing to create an upbeat vibe.

What struck me as odd, though, was J. Bizness's claim of "using unconventional sounds while marrying them to the classic West Coast flavor" for the album. While some of the sounds are certainly different than what many mainstream producers today sample, J. Bizness's actual beats don't bring anything truly unique or innovative to the table, and some grow redundant after just a minute. "Cassandra" starts out with a fast-paced jazz clip, but he really only samples one piano chord, plus a few other background noises, and the beat is essentially an unoriginal piano loop over a fairly standard drum beat. And when it comes to "West Coast flavor," it seems as if "Flips" comes up short in this department, as nothing really jumped out at me as being noticeably West Coast or g-funk.

The bottom line is that, despite a few quality tracks, there isn't much reason to give "Flips" more than a cursory listen. Listeners who are interested in hearing how producers chop up their samples to create a full-length instrumental may want to dig a little deeper, but those who truly want to study the art of sampling should learn from the likes of DJ Premier and Dr. Dre, not J. Bizness. I'm all for supporting an artist who continues to make sample-heavy hip-hop, but without much originality to the beats, and with no lyrics to cover up the shortcomings, "Flips" simply doesn't have enough material to capture the listener's attention throughout.