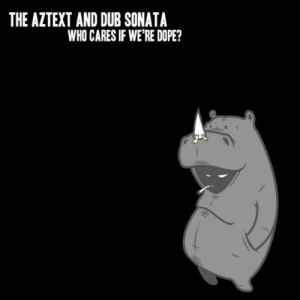 A few weeks ago, I had dinner with an old college friend, and we started talking about music. I was talking about all the hip-hop I was listening to, and he told me that he had basically given up on the genre in the 90s when gangsta rap and then mainstream rap hijacked hip-hop from the more positive, afrocentric trajectory it was on circa 1991. He's a family man now, and can't really picture himself listening to dudes rapping about getting wasted, having sex, dealing drugs and shooting people.

I gave him a handful of artists to check out who might convince him that there is hip-hop being made in 2011 that stays true to what hip-hop meant in its golden age, and among those artists were the Aztext. This Vermont duo have been making true-school hip-hop for the better part of a decade, and have just released their fourth and final installment of their "Who Cares If We're Dope?" EP series. They embody the ethos of respecting the roots of rap, and keeping hip-hop about rocking the mic and not pushing an image.

This time Pro and Learic hook up with producer Dub Sonata, whose mix of old school boom-bap and contemporary production techniques is a nice fit with the Aztext's style. The EP opens up with the "Moments In Rhyme," in which they share the mic with Craig G. The boys are obviously honored and excited to share the mic with the legend, and hold their own alongside him, reminiscing about hip-hop back in the day.

Dub Sonata lays down some acoustic guitar for "Without You," a shout-out to hip-hop fans everywhere. The sample of Masta Ace rapping "I started makin' records but I'm still a fan" sums up the Aztext approach to hip-hop, two fans who decided to pick up mics and have never forgotten what drew them to the music in the first place.

"My Thoughts" further explores their history with rap, going back to the day they first started writing rhymes in their high school notebooks to their current day efforts to keep making music. "Peace of Mind" has the MCs spitting about their struggles and efforts to stick to the straight and narrow over a mournful electric guitar.

The EP ends with "Say No More," which borrows the gimmick from Eazy-E's "No More ?'s," constructing rhymes as answers to interview questions. They call out their critics:

"This group's got heart
And they show mad promise
As they've grown from a novice to a notable artist
But to be totally honest
Even though they sound polished
There's some flaws to their bars and holes in their project
I mean Vermont's got no scene except the mountains thats green
So how the hell you gonna tell me you could be real MCs"
And to believe there are problems in suburbia, please
I guess it's hard to chose between Denny's and Friendly's"

They respond by rapping:

That's what the Aztext are all about. Spitting honest, sincere rhymes, focusing on microphone skills over image, and trying to keep it as real and true to hip-hop as they can. "Who Cares If We're Dope Volume 4?" is another solid entry by the Aztext.