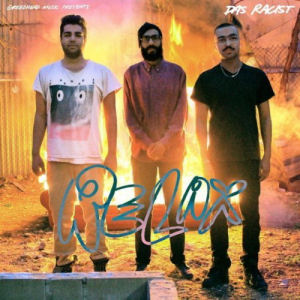 Das Racist are hard to pigeonhole. That doesn't stop people trying, though. Like any group of second-generation immigrants, especially ones that aren't black or white, Asian and Latin people seem to confuse society. As a Brit, I have limited knowledge of American social politics but when I travelled to New York, one thing struck me: whenever I ate in expensive Manhattan restaurants, every single customer was white, and every single person serving me wasn't. That was probably just sheer luck, but over the course of two weeks, the pattern was repeated again and again. It made me feel like I was in a time capsule, until I realised the crucial word: "expensive." You see, I like food, nice food. When I travel, most of my budget is blown on expensive restaurants. And the link I prematurely made wasn't necessarily about race or class: it was simply down to money. In America, as the "Occupy Wall Street" movement is currently highlighting, it all boils down to money.

That's one of the things that marks Das Racist out for particular attention: they rap about money, a lot. Most of the time, it's in an Austin Powers "One meeeeellion dollars!!" kind of piss-take way. Other times, it's undermining the endless (and mindless) stupidity of our beloved hip hop genre that has been brainwashed by corporate thinking and business plans. If you weren't in on the joke, you'd just assume Das Racist are a slightly weird wannabe gangster/hipster rap hybrid. But every now and then on their first official LP, "Relax," you get a brief insight into the more conventional undercurrent to their artistry that seems to gradually permeate the act. What they seem to do is fill their brains up with overflow pop culture references, random internet speak, rap clichés, Pitchforkisms… And then, they just flow in a "free expression" way, until everything comes out like organised chaos. By the time you've listened to "Relax" properly, you realised they are quite brilliant lyricists. You also learn that they are, in their own way, trying to undermine the various ills that have plagued hip hop, and part of them wants to evict the bullshit - they clearly love the genre.

The lead single, "Michael Jackson," is the perfect example, even if it isn't indicative of the whole album. It's one of those instant hits, but with multiple layers to sink your teeth into. On one hand, the music is just incredible, the kind of beat that makes you feel simply invincible listening to it; it has that perfect chorus; add into the mix simply astonishing verses that so purely capture the tone of what they set out to achieve (as others have mentioned, think OTT Dipset anthem). It's a classic moment. But coming so early on in the sequencing, it does skew expectations, somewhat. If you're hoping for an album full of similar anthems, you'll be waiting forever. "Relax" is as diverse as one can imagine, which obviously leaves it prone to the "divisive" label. But perhaps the most important aspect to realise, besides everything else - the jokes, the crazy beats, the endless Twitter feed of references - is that Das Racist want you to know they can RAP. Really, though, they can spit. Hard.

Whilst many prepubescent kids are currently hooked on Tyler, The Creator and the rest of the OBGYN crew, Das Racist seem much more locked on and less reliant on shock tactics - that's not to say they don't use them, but they don't overuse them. Plus let's face it, lines like "Watching 'Parenthood' on ketamine at the hotrrrrl…" are just so off-the-wall genial, not to mention with tongue firmly placed in cheek. As for some of the verses that pepper "Relax" - they are destined to become criminally underrated. For every missed opportunity ("Happy Rappy" which just straight out wastes a Diplo beat), they impress with something like the second verse on the album opener… not really caring about traditional song formatting, they just link together bar after bar in a relentless blast, in messy synergy with the superb beat. In fact, the first four tracks are intelligently sequenced, with the melodic Beck-ish following MJ, and the spooky "Middle of the Cake." It must be said, however, that the middle section of the album is much more variable. You have the half-hearted "Girl" (lampooning typical "girl songs"), the superb El-P feature "Shut Up, Man" and the aforementioned "Happy Rappy" (laced by Diplo). Follow that up with the slightly weak "Booty in the Air" and you recognize that these are slightly non-committal efforts that are pitched between sarcastic and deliberately wasteful. Does that really help the album flow? Unfortunately not.

The final section returns to blistering form. Aside from the solid "Punjabi Song" - featuring an excellent chorus from Bikram Singh - the rest of the album is played with a relatively straight bat. Every one of "Power" (which is musically cracking), "Selena" (with wicked percussion), the free flowing "Rainbow in the Dark" and "The Trick" - which is the natural conclusion of the album. There is a short closer in the form of "Celebration" - which is a slightly pointless 2m40s but hey, this is still their first official LP and a proud moment where they can fuck about in a slightly more restrained manor.

Push comes to shove, whatever I say in some beautifully well-written conclusion barely matters when it comes to "Relax." You just have to listen for yourself, and if you buy into their philosophy of subtle/overt subterfuge and lampooning, you're probably going to enjoy it, for the most part. If we are being specific, the middle core is a touch too ragged and unfocussed, but when it comes to Das Racist, you're looking for memorable moments, not a genre-saving epic. It barely even has a genre, but in the story of their career arc, it's a solid debut with some fantastic moments. They are probably the kind of act that will experiment with whatever they like over the course of their career, and end up with the best "Greatest Hits" compilation of all time that sells millions. Although they'd be happy with $100,000 so that seems like a more realistic aim, for now. Once all the jokes are filtered, you should also realize that these dudes can spit some hot bars, even if they are the least traditional you've ever heard. And whatever happens, they have the potential and it promises to be one hell of a journey.