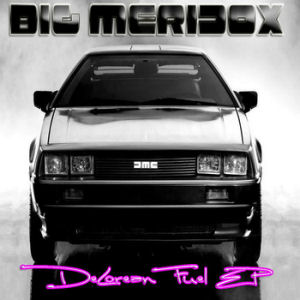 The DeLorean DMC-12 was a car that captured the imagination of car enthusiasts in the early 1980's, which subsequently became infamous as the company and its founder John DeLorean experienced an epic financial collapse. The car quickly went out of production and the limited numbers that were ever sold quickly rose in value as collectibles, with the short lived car becoming even more high profile thanks to its appearance as a time machine in the Back to the Future

movie series. In many ways it has become more important as symbol of the 1980's than it ever was as a sports car, representing the cocaine fueled yuppie lifestyle that the nouveau rich enjoyed.

It's not entirely clear to me why the Tucson, Arizona based rapper Big Meridox (a/k/a Big Ox) chose to name his EP "DeLorean Fuel," though the introduction for his song "Beef (Ballad of the Tough Tongue)" includes a conversation where Ox gets a phone call and his ring tone just happens to be Rocky's theme music. It's true that the first movie in the series came out in 1976, but the most culturally enduring of the films is Rocky III. That film was released in 1982, right as DeLorean Motor Company was falling apart, and had starring roles for both Mr. T and Hulk Hogan. Each of them would subsequently go on to be icons of the 1980's in the worlds of action TV and professional wrestling, and like Stallone himself they are still recognized around the world today. Perhaps Ox is just a child of the 80's who wanted to represent those icons, for good or for bad, as part of who he is. He himself makes no apology for who he is - a gruff sounding, tough talking rap artist.

If you caught the reference to Configa above in "Lie to Kick It," it's fair to say the rowdy Arizonian benefits from the UK producer's ability to lay down a smooth funky beat. He also benefits from working with fellow Arizona rappers like Savant a/k/a Stanstro on songs like "The Beast & The Best," produced by the lengthily named Clavesynths Aglofellaz Company Bums. "Beef (Ballad of a Tough Tongue)" might be the song that best exemplifies Ox though - a dark Barfus track with an piano instrumental straight out of a horror movie. Ox describes himself lyrically as "a giant among the Philistines, I'm Goliath when it sparks" and certainly flows like it. He's a cross between U-God and R.A. the Rugged Man, as insane as that might sound.

The one time Big Ox brightens up the world around him a little is when he lets Tamika Lawrence join him on the quiet storm influenced "Schlomo," but even here he raps "let a hoe be a hoe, like faggots disease thuggin." OUCH. Ox won't be making friends amongst the GLAAD set with remarks like that, but as has often been said here and elsewhere about homophobia in hip-hop, I doubt he cares that much. If you're in the target audience for the "DeLorean Fuel EP" I doubt you will either. What one can hear here is above the average for Bandcamp, which is good given the suggested retail price of $5, but which is also tough to compete with when comparable releases are given away gratis. Ox is a promising lyricist who often gets locked into his "Block Bully" persona to his detriment - he'd still be taken seriously if not every word was dripping when venom. Muddy beats also make his flow difficult to discern at times. It's a good effort, but I think he's capable of more.