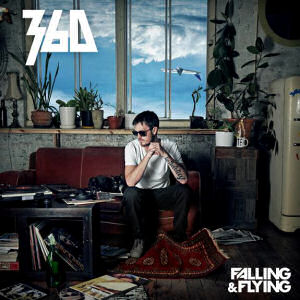 Disclaimer: I'm a huge fan of 360 as a battle rapper. It took all I could to review this album objectively, and while it still ended up scoring quite highly (I know you've cheated and read the final scores already), the product definitely merited its results. With that out of the way, I'd like to introduce you to the artist himself: Melbourne, Australia's 360 gained notoriety at home with his 2008 debut "What You See is What You Get" after seeing international recognition through battling both at home and in New York City during 2007's 2-on-2 World Rap Championships. His fanbase has seen a steady increase, and this album, "Falling and Flying," hit #1 on the Australian iTunes chart when it was released on September 30th.

Almost all of the lyrical content is covered in the album's first verse from the fantastic intro "The Takeoff," where a slow violin solo leads into Styalz Fuego's thumping bass line and soaring synths:

"Aiyyo, it's me, myself, and I. Yeah, I'm back again
I played the background, watchin' what's been happenin'
I never thought when I was fuckin' up in school
That this shit would even work. If it doesn't, I'll be cool
Even if for now I only manage to scrape by
As long as I'm living off of rap, it's a great life
So I'ma take my ways to create this and take time
Cock back, and aim at a great height
This is it, though, I better step forward
And it's a chance to be forever airborne
But I'm never happy with the second-best score
While I'm chasing after a dream I never slept for
Just to get my rap on, talking 'bout whatever I have done
Find belief even when I have none
Fuck it, I'm about to have fun
And not think about this life cuz we only have one
I'm sorry I'm so late, yo. I slept in
You can't blame me. I was having the best dream
I was watching my life up on a big screen
Had to press it on pause, flickin' to the next scene
[...]
I know that I can be whatever I believe
I keep my feet grounded and bring the sky to me"

This is the majority of the content that 60 discusses on the album, and he does so effortlessly: his flow and presence are nearly impeccable, and the star attraction is comfortable whether he's trying to change his reputation with the ladies while awash in pseudo-reggae Auto-Tuned glory on "Boys Like You," or reflecting on his tumultuous past with "Miracle in a Costume," both of which carry scene-stealing cameos by Gossling. (Sidenote: I never thought I'd ever use the term "pseudo-reggae Auto-Tuned glory," but we'll get to that later.)

Now, as for the music: the rigidity of rap purists is always frustrating. This small contingent of heads is the musical equivalent of a religious fundamentalist sect: they maintain that tradition is tradition, unmovable and staid as a gargoyle's chin. Thus, this record isn't for the orthodoxy—although if they gave it a shot, they might find something to pray to.

Normally, one of the problems with rappers making a foray into genre-bending is that the ambition of the project outweighs the quality of the outcome—the rappers end up sounding forced or foreign (or both) while attempting to mesh sounds that end up clashing instead of blending. That is not a problem here. In fact, it's one of this album's biggest accomplishments: nothing sounds out of place. The guest artists complement the music perfectly, and it toes the line between Hip-Hop and pop and techno extremely well. I'd go so far as to say that this album does what Kanye West attempted to do with dubstep on "Watch the Throne" in a more effective manner. Everything sounds fluid and natural, and thanks to a great array of sounds from producers Styalz Fuego, '98 Bulls, and M-Phazes, its cohesion is near perfect. The production is even more effective when it's needed to give 360 a boost: when there are some moments where 60's writing falters—and those are few and far between on the album—the music makes you disregard the sparse lyrical flaws.

"Falling and Flying" has created a new aesthetic in hip-hop music: it's taken all of the best elements of electronica and fused them so well with this particular rapper that I'm not sure if any other artist can do something similar. The only record even close to this in regards to reaping a huge reward from the even larger risk of melding genres like this is Dizzee Rascal's "Tongue N' Cheek," and even then, Dizzee still appealed to a more debonair lifestyle. 60's music is relatable, close-to-home, and accessible. He's made a Hell of an album, and the scary thing is that he has nothing but sky ahead of him.