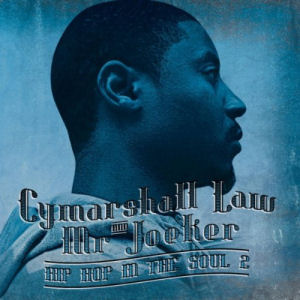 Cymarshall Law is from New Jersey by way of the U.K. The rapper has been attacking microphones for the last decade. He's been honing his craft perfroming on the Van's Warp Tour and the Scribble Jam, and released several albums. This is a follow up to 2008's "Hip Hop in the Soul."

This album is accurately titled. "Hip Hop in the Soul II" contains 18 songs of soulful hip-hop. Producer Joe Kerr supplies well-orchestrated and crisp beats. Cymarshall has a gravelly voice not unlike Busta Rhymes or John Robinson. He delivers his rhymes alternating between singing and rapping, in a style that recalls the dancehall artists of his parents' native home of Jamaica. His lyrics are honest and deep, analyzing the struggles of life with an insight you don't see often enough in hip-hop. He delivers lines like "Right and wrong are only opinions/Everyone has their own truths, remember." He also delivers some clever one liners, complaining about being "a first class MC but they had me in economy."

"I'm Gonna Win" is about Cymarshall staying strong in the face of adversity. "I have three kids/I love all of them the same/That's why when I get hurt I be swallowing the pain," he raps over a triumphant beat. The strongest track here is "911," which talks about the Haitian earthquake and other recent disasters.

Cymarshall is a strong lyricist, and he's paired with a strong beatmaker Mr. JoeKer's beats are grounded in boom-bap, but pull in eclectic elements and samples. On "Everyday," for example, he combines some electronic buzzing with folk instrumentation and a women's voice on the chorus making all of these diverse elements work together. His combination of hip-hop, electronica, and soul makes for beats that match the sense of earnest determination in Cymarshall's lyrics.

While John Robinson shows up on one track, the rest of the eighteen tracks on this album are strictly Cymarshall and JoeKer. There was a sameness that crept in towards the end of the album, especially given Cymarshall's distinctive delivery. His tendency to accentuate the last syllable of each line made some of the tracks feel more like lectures than songs, which is the risk a rapper runs when he chooses to rap about something of substance rather than partying. That's not to say that any of the songs were bad, but they could have edited this down to twelve or thirteen tracks and made it a more manageable listen.