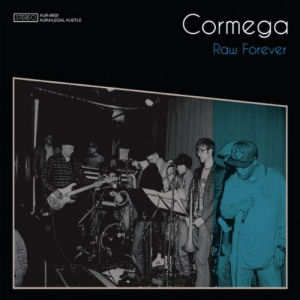 Greatest hits and rap music don't mix well. Rap fans tend to fall in extremes between hardcore fans and casual fans. One group already owns every single song and album, the other group probably spent all they will spend 99 cents at a time at the iTunes store. Therefore, the appeal of a greatest hits album is usually quite limited. Seemingly aware of this issue, Cormega has done his best to make his greatest hits album worthy of a purchase. First, he actually put some effort into the title and artwork for "Raw Forever." Absent here are the generic titles and leftover photos from previous album shoots found on most greatest hits. Second, he actually put some effort into the album itself. The tracklist for the first disc is comprised of Cormega's favorite songs, so the collection has a personal touch to it. The second disc is comprised of Cormega songs re-made with live band, The Revelations, providing a new musical backdrop. The result is a fresh take on an old concept that holds much more appeal than your usual greatest hits collection.

The first disc consists of 11 tracks, any of which is arguably Cormega's best. My personal favorite Cormega song is also the first Cormega song I heard close to 15 years ago on a Def Jam promo sampler, and you'll find "Testament" here as track number 2. Another often lauded Cormega song, "Killaz Theme," is number four in the sequencing. Nothing is wrong with the tracks included, but at only 11 tracks and with so much space on a modern audio disc, it's really a shame tracks like "Beautiful Mind" and "American Beauty" were left off. It would have also been a good idea to include some of the lesser heard Cormega features on a track or two.

The heart of this collection is disc two, which includes old Cormega songs in a way none of his fans have heard before. Cormega wanted to make the tracklisting of the second disc a secret until fans actually heard it and for this reason the tracks on disc two are only named by roman numeral. If you are familiar with Cormega's catalog, it will only take a quick glance at the guest list to figure some songs out and a few seconds of listening to identify the rest. To not ruin the surprise, I will only say that the majority of the songs are from his most recent studio album, "Born and Raised." While Cormega hinted at some "new" music on this second disc, from what I can tell this is limited to additional verses from guests on previously released tracks and one stray verse. The reworked versions of these songs have mixed results. None of the re-workings are bad, but some fail to live up to the original versions. This occurs on the tracks where vocal samples on the original beat are replaced by music. Ultimately, the vocals in the original beat gave the music a soulful element that is lost with only instruments used.

This collection essentially boils down to a greatest hits album paired with a live album, but inherent in the presentation and the price is the fact that Cormega did his best to ensure this collection appealed to both his hardcore fans and casual fans. The recording quality on the live disc is superb and void of any annoying audience clapping or noise. Personally, none of the re-worked versions will be replacing the original in my playlist, but the disc as a whole has a unique vibe and I can see myself spinning it from time to time. Overall, "Raw Forever" is an ambitious attempt to redefine the greatest hits album and works well in that respect.