Lowkey :: Soundtrack to the Struggle 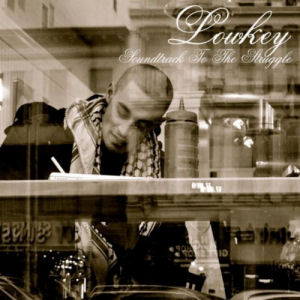 For those not in the know, Lowkey (real name: Kareem Dennis) is the infamous 25-year-old rapper from London, of English and Iraqi descent. He's packed a lot into that quarter of a century, and has built up an impressive head of steam going into the release of his sophomore album, "Soundtrack to the Struggle" - the buzz in the UK is simply deafening, and he's not even signed to an established label. It would also appear that the timing is dead-on, for Low's rhymes are heavily slanted towards political activism, shining a light on the dark factual underbelly of the superpowers and governments who are, from his point of view, effectively riding roughshod over the majority of the world. Think the London riots, think Occupy Wall Street, think the backlash against bankers with the backdrop of recession. His words couldn't have been more better timed, as he speaks fearlessly upon any subject matter he wishes to address.

STTS is twenty-six tracks long and clocks in at over ninety-five minutes long - let's just rewrite that numerically, in case the impact was dulled… That's 26 tracks and over 95 minutes long. So it would be fair to assume that he's got a lot to say, and even the six skits included are carefully chosen - in fact, he may even have written certain songs based on some of the skits themselves (perhaps "The Butterfly Effect" was sparked off by "Skit 6"). Throughout the album, Lowkey's aim is to make you think, spark you into action and reframe your seemingly cast-iron definition of who the "bad guy" is. Like any political activist, he occasionally resorts to shock tactics, but one could argue that many of us have become so desensitized to violence, the news, the endless wars… Sometimes, it takes someone focused and informed to wake the masses from their slumber. It's a noble intention (from his point of view) but is Dennis the rapper to do it?

The album kicks off with the title track, and the echoing of Lowkey telling us that he might not be around when we hear this album (he's still alive, as of the timing of writing), and he's already trying to fix into our brains that he's just a rapper writing songs, but because of the controversial subject matter, he's a genuine target for those with something to lose. It's a predictably melodramatic entrance, yet his tone - from the off - tends to remain relatively calm, dispassionate and almost forlorn. Rarely does he lose his cool, as he favors the Rakim-style vocals, and instead of rallying the troops with rousing delivery, he's got lasers in his eyes. He claims to be "a product of the system he was born to destroy" and it leads into the lush instrumental of "Too Much" featuring the dulcet tones of Shadia Mansour. The staccato and repetitive first verse is somewhat off-putting, but the sentiment - that money shouldn't be the most important thing in the world, but it's become the most necessary evil - is pertinent in these harsh economic times. He likes to take a combative stance in one couplet, then completely switch to a more global view (e.g. from the cleaner to the Queen in no time at all). Everybody's favorite political activist, Immortal Technique shows up on "Voices of the Voiceless" and the two rappers combine quite effectively to give the fans what they've been craving. "Hand On Your Gun" aims fire at arm dealers and warmongers; however, it is undermined by the cartoony ShowNProve beat, even if Lowkey drops an especially hot first verse.

Following the first skit, "Terrorist?" forms one of the crucial pieces of the jigsaw: that question mark isn't accidental, as the song points out - quite fairly - that terrorism can wholly depend on your point of view, and who is to dictate who or what a terrorist truly is? It's nothing new, of course - one need only think back to a "Food & Liquor" Lupe Fiasco on the stunning closer "American Terrorist" (which, it must be said, is a superior song, even if Lowkey's attempt is solid enough). Dennis then goes out to write a love song to the women of the world, imploring the listener to treat all women with respect, and asks for absolution over his past errors towards the fairer gender ("So think about this stuff when you diss her, That's somebody's daughter/mother/sister"). Surprisingly, "Dreamers" hasn't been released as a single, but it should be soon enough. Jacking the beautiful instrumental from Lauryn Hill's "To Zion," complete with those resplendent Carlos Santana chords, the joint chorus with Mai Khalil is gorgeous and universal. For complete transparency, taking any beat from one of my top three albums ever is a risk, but consider it a real success. "Obama Nation" soon follows, and although it's a decent enough stab at a critique, it doesn't quite grab your attention as well as it could - there are some clever couplets, but one of Lowkey's flaws (his flow/delivery) just doesn't facilitate real connection at times, but more of that later.

"Cradle of Civilization" is sandwiched between two related skits that show the prejudices leveled against Obama and the general belittling of the Arab world in America. It's cleverly done, and the song is solid enough, mixing personal recollections with politics once again. "Blood, Sweat and Tears" finds East London's finest dropping by to gift a standout guest verse, and it's bizarre to think that there are a generation of young rap fans that just don't recognize the skills that Klashnekoff possesses. "Everything I Am" is another personal confessional, over another ShowNProve beat, and unfortunately it just doesn't click together, with the beat and flow just not syncing well enough. "Skit 5" is incendiary, but truly gripping, leading into one of the tracks that really put Lowkey on the map: "Long Live Palestine." The truth is, called any track by that name, it's going to get attention - without getting into the politics, it's a semi-successful song that attempts to highlight some of the issues going on in the troubled region. One of the best instrumentals on STTS, the beautiful and melodic "We Will Rise," possesses an incredibly mournful-sounding chorus, and Lowkey is on form lyrically. "My Soul" doesn't make the most of the excellent Vendetta beat, strangely down to the mixing/mastering, but it just about remains a decent album track. The aforementioned "Skit 6" sets up "The Butterfly Effect" and Kareem raps from the point of view of a soldier, with it turning out as one of the conceptual high points on STTS.

"Obama Nation (Part 2)" features M1 from Dead Prez, and Black the Ripper. Both MC's, in particular the latter, drop vitriol over the strong instrumental and catchy chorus. However, their verses just don't really hit the target, seeming a touch insincere and OTT: calling Powell, Rice, Obama and the First Lady "house niggers" just doesn't seem to sit well. Lowkey's verse is much more tightly focused and well delivered, and in truth he probably should have gone for dolo. "Dear England" must be a particularly fresh addition, as it details many of the recent travails facing the country - specifically the riots and the opposing ideologies in the ensuing fallout. Lowkey was particularly vocal on Twitter at the time, standing up for the demonized youth, asking what had pushed the young rioters so far in the first place, and he does a great job turning those tweets into a supremely effective song. "Haunted" details the suicide of Lowkey's brother, and it's fitting in every way. "Terrorist? (Part 2)" saves one of the very best beats until near the end, and it's another clever concept song, with Low on trial - it's a standout number, and it leads into the final number - "Million Man March." It's a rousing end to the album, and it's actually a welcome change of pace to hear him spitting at a quicker tempo. So, 95 minutes later, that's the "Soundtrack to the Struggle."

This is an extremely dense album to tackle, for critics and listeners alike. There is a lot to absorb, and it must be said that Lowkey has ambition, talent and he is, without doubt, a superb lyricist. But the creation of great music amounts to more than simply a cause and being about to pen well. On STTS, does he prove his worth as a songwriter? Yes, most definitely, and over this many tracks, you'd expect a mix of political, personal and concept tracks. Is the music appropriate and consistent? Yes, and yes. It's not jam packed with "classic" beats, but there are only a couple that you'd perhaps consider dropping. There is a successful feel of continuity, and it successfully gets that "album feel" down pat, meaning you can just start it up and let the (long) long play do its thing. There are, however, various misgivings. Firstly, Lowkey's delivery varies wildly - not the vocals, but his flow. He's such a good lyricist at times, but then at other times, he over-writes elements of songs, meaning that the flow plays second fiddle. This can make his rhymes difficult to listen to, without a doubt (and I'm from London). The best illustration is when Klashnekoff pops up halfway through the album and straight bodies the track with his killer flow. Lowkey doesn't do that throughout - I'd even go as far as to argue that well over half the album suffers from this affliction.

Regardless of whatever the political views are, first things first: you're on RapReviews.com and we assess how well the MC spits, how they incorporate the great tenets of hip hop into their music, and one can't help but feel there are certain aspects missing from STTS that prevent it being truly great. Ambitious, captivating, informative? Certainly. But is this the classic that so many are claiming it to be? That depends on what you listen out for. Diehard Lowkey fans will LOVE this album - it's practically a double LP and it firmly delivers what you'd expect from the Londoner, and there should be much more to come in the future. Hip hop fans in general? Perhaps opinion would be more divided, and not just because of the political views that might be tough for some to digest. It's well worth a listen, but ultimately whether or not you'll genuinely take to it depends more on personal taste. After all, hip hop fans are the most egalitarian of all. We don't care whether you're black, white or Asian; from the hood or the 'burbs; whether you rap about politics or money. In the end, we just want great music to listen to - it's admittedly selfish, but still a lot purer and fairer than most regimes in this world.