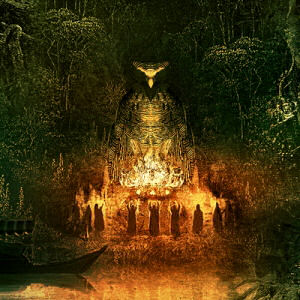 The Bohemian Grove, located near San Francisco, is home to the Bohemian Club. The club, whose members include prominent businessmen and politicians, including most U.S. presidents, is a secret society with arcane rituals based on paganism, including a Cremation of Care in front of a giant owl shrine.

3:33's latest album is meant to invoke the mystic paganism that permeates the Bohemian Grove, capturing the dark arts that are associated with the spot. In their press materials, they claim the album was recorded there, although I can't confirm that. 3:33 write, "those who listen will swear they can hear the very voice of Moloch whispering, foretelling coming realities in dead languages. Some can hear the crackle of burning effigies, filling the night sky with acrid unholy smoke amidst the shrewd cackles of mad men foolish enough to offer their souls to the Babylonian blood gods. The album sounds like tamed chaos- a focused channeling of the cryptic energies that permeate from within this house of leaves."

I don't know much about 3:33. From their bio I know it is a "they" and not a he or she. I know that their influences are more along the lines of experimental composers like John Cage rather than hip-hop producers, although they are on a hip-hop label. For all I know it is Parallel Thought's experimental side project, the freaky music he makes when he's sick of making beats from dusty samples. Their first EP came out earlier this year, and they've released a free EP on Bandcamp in anticipation of this album.

The album itself has no writing on it. The front cover is a painting of a group of hooded figures worshipping in front of the owl statue, and the gatefold is a painting of a skeleton on fire in the woods. There are no song titles. The tracklisting on the one-sheet that accompanied the CD lists the songs as LFTG-1, LFTG-2, etc. In other words, the entire project is completely inscrutable.

Including the music. 3:33 make instrumental hip-hop with a definite freaky and experimental streak. A lot of the beats are distorted, as if they were being played on blown out speakers. They mix in what sounds like pagan rituals, with people chanting and saying crazy things. There are also a fair amount moody, booming drums that sound like outtakes from DJ Shadow's "...Endtroducing." Track 2 has gentle acoustic instruments layered over slamming drums. Track 4 is like hip-hop horror music, but then ends with an 80s R&B song "Don't Talk To Strangers." Track 5 mixes in high-pitched Middle Eastern singing over what sounds like glasses being played.

The end result is a disc that is interesting, but so unsettling that I had a hard time listening to it. The whole thing was straight creepy. It makes sense that it is coming out on All Saints Day; the album seems to capture the spookiness and mysticism that is associated with Halloween. For those who like their instrumental hip-hop evil, this is an album made just for you.