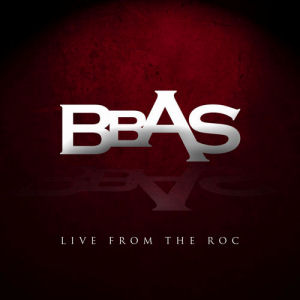 Live hip-hop albums are either hit or miss. While it is impossible to fully replicate the environment of a concert, there are a fair share of live albums that come close and make the listener feel as if he or she is there in the audience. On the flip side, though, the sound quality on a live album is not nearly as good as that of an actual performance or a traditional CD, and often times the result is a garbled and static-filled listen where the artist's speeches in between songs are more audible than the instrumentals and lyrics themselves. Until I heard "Live From The Roc," my only exposure to the Brown Bag AllStars was group member Soul Khan's debut solo album "Soul Like Khan," which I reviewed back in January of 2011 and found to be a polished and well-crafted release that showcased his strong delivery and witty lyricism. After doing some background research on the New York-based group of underground affiliates, there was no doubt in my mind that that Brown Bag AllStars was a talented group of emcees and producers, but I was skeptical as to whether or not their style would transfer over to a live performance recording.

Reviewing "Live From The Roc" like a typical album simply does not do it justice. For starters, at only seven songs in length, some of which feature a good 30 seconds to a minute of the artists addressing the crowd, it obviously does not have the depth necessary for a full-length release. What's more, given that only one of the songs cannot already be found on a previous Brown Bag AllStars album, fans looking purely for new or previously unreleased material will be largely disappointed. Why then, you might ask, is "Live From The Roc" worth a listen? Well, for starters, the group brings an energy to the stage that is hard to ignore, and even though the crowd at the Dub Land Underground in Rochester, NY, appears to be small in number, the AllStars kick it like they're performing in front of an audience of 1,000 clamoring hip-hop heads. It's clear that they're not in it for the money, and their passion for hip-hop and their camaraderie with one another truly stand out on "Live From The Roc."

The Brown Bag AllStars make their presence on stage felt from the very first song, "Get Up," as they rap the chorus "step down, we step up, you let down, we next up/Who the best now? Check how the Brown Bag get up" over a jazzy trumpet sample. It soon becomes apparent that the AllStars are simply there to have a good time and rap about what they know best, and it is this carefree mentality that makes the live performance such an enjoyable listen. "Gimme the Booze," a remix of Biggie's "Gimme the Loot," pays homage to the origins of the group's name, and "League of Intoxicated Gentlemen" continues in the same vein, as the group expresses their love for malt liquor over the aggressive drum loop, rapping "Knock down the top shelf, we 40 oz. veterans." The liveliness continues on "Raw Daddy," as the pulsing bass and crooning soulful horns lay the foundation for Soul Khan's opening verse, as he spits "Drop hideous bars, smell like shitty cigars/ Hold grudges real tight like our titties is large," and the upbeat feel of the track leaves the listener wanting a few more verses. Perhaps the best song on "Live From The Roc," though is the head bobber "Undeniable (Audible Doctor Remix)." With a silky smooth sample-driven instrumental, each rapper who gets on the track sounds better than the last, as the AllStars lay waste to posers in the hip-hop game with lines such as "Weavin' through bars like cats on the packed train cars/ Stay far from those who look the part but can't rip flows/ You fly like an angel with its wings clipped/ We came to bring it to the next level with every song we sing."

The energy never lets up from beginning to end, and as the mixtape came to a close I was able to see exactly what the Brown Bag AllStars sought to accomplish with "Live From The Roc." Sometimes, you really have to see an artist in concert and hear them address the crowd to realize what they're all about, and in this case, "Live From The Roc" allows the group's true colors to shine through. The Brown Bag AllStars are at ease with their place in the underground hip-hop game, and their confidence on stage and on the mic makes their lyrics that much more powerful. And whether they're talking about hitting up the corner store after the show or putting fake artists in their place, the AllStars always seem to be enjoying themselves and living it up to the fullest, and this infectious vibe is easily transferred to the listener. Obviously, it's difficult to assign a score to "Live From The Roc" because of its short length and its overall lack of new material, and while it may not have much replay value, it serves as a good introduction to some of the group's previous work. At the very least, fans of underground hip-hop who are not already familiar with the Brown Bag AllStars should give the mixtape a listen and hear firsthand the impressive lyricism that the group brings to the table.