Torae :: For the Record 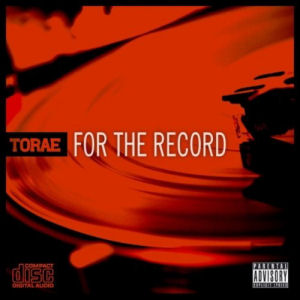 If the phrase "up-and-coming rapper" is an overused cliche, then we're going to have to come up with a brand new one to describe Brooklyn emcee Torae. Judging by the off-color parody of a high school graduation on "Intro" from "For the Record," there's no question Torae would mind new definitions himself. "How are you gonna leave your mark? How are you gonna let 'em know you were alive?" It's clear that simply being one of the top mixtape emcees who's not a household name isn't enough for him. How many years did fellow Brooklynite Saigon struggle with being one of the greatest rappers never paid in full? Torae can't be blamed for wanting to speed the process up just a lil' bit.

"See, I never had the wool over my eyes
Unless Lawnge's on the beats and Dres' on the rhymes
That Native Tongue feel'll never demise
as long as there's songs in my lungs I swear it's alive
I got the energy of Left Eye
Ridin through the Honduras like it's Bed-Stuy
The good die young so at twelve I
got the double breast pin steps in my necktie
Uhh, you niggaz rarely dressin the part
I'm at church with my easel, blessin the arts
My flow is so Progressive, they was in talks
to have me doing those commercials sellin insurance"

Songs like "Alive" are a non-stop barrage of cult hip-hop references splashed with pop culture and spiced up with the comedy punchlines. The upside and perhaps to a much smaller degree downside of Torae's flow is that he hits you so rapid fire with thoughts and ideas that you rarely have time to digest one before the next comes. A lot of rappers like to brag that you gotta rewind their raps and "figure that shit out when you get home" like Redman once famously rapped on "Dare Iz a Darkside." Torae doesn't just talk that talk on "For the Record," he lives it.

Thanks to an all-star list of producers boosting his music, there's no reason Torae shouldn't push it to the max then see if you can keep up or not. There are only two repeat performances behind the boards on the album, and we'll get to those in a minute; let's start with the dopeness of the one-offs. We've already mentioned "Alive," which was produced by Khrysis, but Large Professor's "Do the Math" deserves a shoutout. Quietly the old Pro has been making new noise in hip-hop over the last couple of years, so it's good to hear him drop in here and put strings behind Torae's musings. "Would the product of Run-D.M.C. be the same/if Run was the deejay, when Jay had been slain?/Imagine Richard Pryor never snorted cocaine." It's the hip-hop equivalent of Elseworlds. Diamond D's "Changes" is just over half as long, but floats lovely over a marimba/xylophone type backdrop. Marco Polo's "You Ready" is much more intense, starting out with sounds like a heart monitor going buckwild, and keeping up the punches coming like a Rocky score.

"I turn Men II Boyz, opposite of Michael Bivins
When I spit it, the biggest niggaz'll feel like a midget
I'm downgradin y'all, AR to your A&R
Lay off I'm sprayin y'all, ain't often I'm playin dog
Now take heed, to the words that I'm sayin y'all
I leave maggots on you faggots with the K and all"

Other heavyweights of hip-hop production to join in on the fun include Pete Rock on the jazzy but deadly cut "That Raw," !llmind on the synth heavy "What It Sound Like" which guest features Pav Bundy, and Nottz gets his one shot on the well-titled "Thank You" - Torae gives dap back to all of his supporters. We did mention there was a limited amount of double duty being done though, one of which is famed beat maestro 9th Wonder. He gets a full length track on the sinister "Shakedown," and a smaller role on the "Only Way" interlude, which would have been hella ill as a full song. That leaves only one person to get the rare stamp of not only getting double duty on "For the Record" but actually getting two full songs to do it on, and that's Eric G. His minimal drums lightly snap and tap out the background of the horny horn song "Imagine," and his "Reflection" is more lush but equally understated, allowing Torae's vocal tone to remain the sole focus.

To be sure Torae receives all of the accolades he's deserved so far for mixtapes and collaborations with other top names in the rap world. There is nothing bad or whack about "For the Record," so it may just be that at only 48 minutes long I'm simply disappointed there wasn't more content. Then again it may be that Torae suffers from Brooklynite soundalike syndrome, because to some degree he comes across like a less charismatic Jay-Z or Saigon, and as dope as his lines are they are often lacking in forceful intent. If every emcee on wax yelled for emphasis then nobody's animated raps would have any impact, but by the same token if you don't let people know that you're hungry once in a while they may not think you're that serious and/or that you're already living comfortable. I'd like a little more from Torae. I know he has talent for days and all the right connects on the production tip, so for me there should be no excuses. As good as this is, I expect him to crank it up a notch.