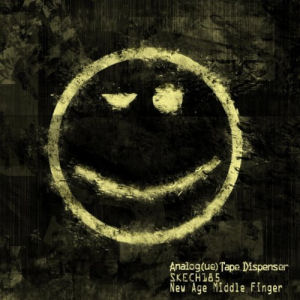 Think very hard: when was the last time you heard a well-written rap record? I'm not talking about punchlines, song structure, hooks, or bridges - but when can you remember wanting to read the lyrics you'd just heard on paper? Skech185 is one of the best writers in rap, hands down, and "New Age Middle Finger" - his new album with Texas-based producer Analog(ue) Tape Dispenser - is the best-written rap release of 2011.

It's not that his style is so image- and metaphor-heavy that it's almost nonsensical (a la Aesop Rock) or that he can string together crazy multisyllabic rhyme schemes effortlessly (a la Elzhi) or that he's got a million clever punchlines or pop culture references (a la Chino XL). But he discusses relevant subject matter with an adroit wit and a sharp eye for detail. He's got a voice that sounds like it should narrate a "Sin City" sequel and a flow that hits the drum from unusual angles, switching from quintuple time on "Inventory" to the simplistic-by-comparison third verse on "Surgeon General Warning."

His semi-automatic flow, however, can occasionally jam, but it comes across almost intentionally at times. Lines like "She's scrapbook beautiful" on "Tree in Frame" can escape a listener's grasp easily because of the barrage of lyrics Skech is hurling at you. Thus, the lyrics that he's (thankfully) transcribed for you on his Bandcamp page becomes required reading for his album.

As for the production, eleven of the album's thirteen beats are provided by Analog(ue) Tape Dispenser, who often utilizes soft melodies atop bass-heavy drum tracks and dusty breakbeats to accentuate Skech's fire-and-brimstone delivery. The easiest comparison I can think of is El-P using DJ Shadow's MPC.

The perfect introduction to the duo's sound just so happens to be the album's opener, "Content," where a light piano loop cascades into a hurricane of choral samples and an avalanche of bass. Skech matches it vocally, barreling through the instrumental like Poseidon with a trident in his hand. The album's bookended by songs with apolcalyptic implications: "Content" flips a familiar R.E.M. chorus into a dark refrain ("Where's the love? Lost in the dark. Where's your compassion? Trapped in a box! The world's fallin' and I feel fine") and "The End" concludes the record by placing an emphatic stamp on the thoughts that cloud the album.

"The Truth" has a hook that sounds like a meeting of chopped-and-screwed music with the infectiousness of propagandistic subliminal messaging; the blatant iconoclasm ("Who gives a fuck if Tupac's dead?"), political incorrectness ("I'd fuck any female friend I have if given the chance"), and harsh facts ("We clap for heroes, but villains have better songs!") that populate the verses; and k-the-i??? provides a ridiculous organ-fueled monster of a beat. Skech's energy hits insane levels on songs with great choruses, including "The Truth," "Surgeon General Warning," and "Hang Me." Even those that drop into spoken word monologues midsong (such as Lana Simpson's spoken-word prologue and epilogue on "Tree in Frame" and Gilead7's theology lesson on "Christmas") don't lose their effectiveness, and even those without discernable choruses carry a refrain or bridge of some sort to allow the listener to exhale a bit between dense columns of verse.

Despite the uniqueness and genuine passion of Skech's delivery, the album's best moments come when he settles into a comfortable cadence and allows his words to do the work, as he does on "Breathing Room," a defiant ode to the parents who don't get his music or his politics:

"I'm a nigga to ni--ers and I'm a ni--er to you
I'm a nigga to non-blacks who think saying nigga is cool
When I graduate, I'm just another ni--er that went to school
And when I die I'm just one nigga you never knew"

"Y'all bastards gon' do right by me
Ya right by me, find yaself needing nine IVs
Multiplied by three, and a different type of ID
I piss on my wife... Imagine if I don't like what I see
[...]
Please, don't respect that I battle
Expect I'm an asshole
Accept you're cattle
If you talk tough, why you flex so Snapple?
Got a crew that'll protect my shadow
Talk shit, punch you
and leave your brain with a Connect Four rattle"

There are spots on the album where Skech's writing is completely tuned out by his delivery, the main example being "Inventory," where the lyrics are almost completely lost in the flow. However, this is the only point of the record where the cadence becomes problematic; the rest of it is rewarding in its complexity.

"New Age Middle Finger" won't be everyone's cup of tea, and that's okay. However, they'd be missing out on some truly next-level rap, even if it can wear a bit harsh at times. Listening to the debut record from Analog(ue) Tape Dispenser and Skech185 is like watching a volcano explode, and the lava's inviting - but feel free to wade in it at your own risk.