Barbone :: One to Self :: Barbone
as reviewed by Steve 'Flash' Juon 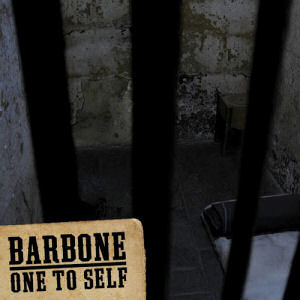 Joining the long list of Australian rap artists looking to make a name for themselves internationally is 24-year old Melbourne native Barbone. He might be new to the list, but he's not new to rapping, having spit lyrics since he was a teenager back in the 2000's. He cites his inspirations as a who's who of 1990's hip-hop stars such as Onyx, Kool G. Rap, Ras Kass, and Big L. Perhaps one might be disappointed he's not citing fellow Australians as inspiration, but to be honest I wouldn't know which 1990's Aussie rappers to cite myself, as my collection of hip-hop records, discs and tapes was predominantly North American (U.S. and Canada) in those days. At least he's not citing anybody whack. Imagine how horrified we'd be if he was inspired by Vanilla Ice.

"One to Self" is his latest evolution following a short stint in the rap group Reverse Psychology, during which time he toured and performed with notable Australian rappers like Fluent Form and Geko among others. The networking has clearly been to his benefit, because "One to Self" has production well matched to his lyrics, neither drowning him in melody or bass nor being so understated it would qualify as minimalistic. In other words, the beats strike a healthy balance, spread out over a half dozen different dudes.

On "Big Nose Bandits" Mizaricuts By Dukets pounds the drumbeat as Barbone rails against pop rappers who "are as transparent as Helen Sharp." (If that punchline was over your head, look up the movie "Death Becomes Her

.") Boom bap beats from Scotopic Visions fill the posse cut "Goon," an unapologetic ode to binge drinking. Glinsterworm samples from Das EFX on "Tainted," while Blazin Marty tickles ivories to hard taps on the snare, with G Force and W. Waters joining in for a few bars.

As for Barbone himself, I'd be kidding you if I said he was the absolute cream of the crop currently available for import. "I'm really concerned about revenues/to make sure it's substantial for rent and food." So are we all my friend. "Keep Moving" proves he's capable of forming cogent thoughts and delivering them in a metered format, but it doesn't show him reaching above and beyond the norm in an already crowded field that is at least at present burgeoning with talent. By the same token he's not out there being a lyrical or musical embarrassment, so I wouldn't tell the youngster to quit his night job. Whatever issues he had with his prior crew, he's obviously good enough to stand on his own as an emcee, though apparently he worked out his issues with Reverse Psychology long enough for them to cameo on "This Life (Remix)." That suggests a healthy maturity as an artist that will bode well for him in the years and albums to come.