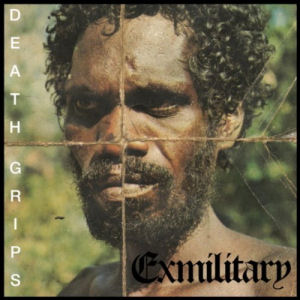 I downloaded "Exmilitary" when it came out in mid-2011. I unzipped it, loaded it into my iTunes, listened to it for thirty seconds, and immediately deleted it from my hard drive. Some dude yelling over beats that sounded like a broken down washing machine? No thanks. There are hundreds of albums I want to listen to, so why would I waste my time with something so irritating? Death Grips sounded too loud, too annoying, too chaotic, and too noisy. I figured I didn't need that in my life. I was wrong.

I resurrected it from my trash a month ago, after several bloggers and critics I trusted sang its praises. It hasn't left my stereo since. "Exmilitary" may be noisy and chaotic, but it is also one of the most refreshing hip-hop albums to come out in 2011. Death Grips is a Sacramento crew fronted by MC Ride,with Mexican Girl, Info Warrior, Flatlander and  Zach Hill making the noise. For those not familiar with California's capitol city, it's less cool than San Francisco but more interesting than San Jose, a combination of politicians, suburbanites, artists, engineers and meth heads. It's not known for hip-hop, or anything other than being the capitol and having a lot of trees downtown. It's relatively cheap to live, which allows its artists more freedom to create and innovate. Death Grips is a great example of this.

"I close my eyes and seize it
I clench my fists and beat it
I light my torch and burn it
I am the beast I worship...
I am the beast I worship
In the time before time eyes 'bove which horns
Curve like psychotropic scythes
And smell of torn flesh bled dry
By hell swarms of pestis flies
Vomiting forth flames lit by
An older than ancient force
That slays this life with no remorse"

Ride doesn't so much rap as he yells on beat, screaming his lines like a man completely off the rails. Ride sounds like nothing but trouble, the kind of guy who will force you into compromising situations, impel you to kill millions of your brain cells, and end up sleeping with your girlfriend.The druggie theme continues on "Spread Eagle Cross The Block," where he raps about his need for illicit substances:

"I want some more of it
I want too much
I got so bored with it
I shot it up
Wanna light my torch with it and get all fucked up
What is it, where is it
How will it affect me
Fuck that shit, I need that shits bound to be the death of me
Fuck buying it I'm taking it, and sharing it with nobody"

"I Want It I Need It (Death Head)" is an epic six-minute song about the search for sex and drugs.

"Been working way too much need to get out and get fucked up
Whats going on, where's it at
Make some calls to make it crack, lets see...
I need money, drugs, a ride
And a spot with hot ones inside
The mission:
To get all of the above in a limited amount of time
I can do this and it's done
Like that we're on our way
Be it acid on the tongue
Cocaine in your brain
Or some weed that hits your lungs
Like a runaway train
Hell yeah, from DMT to MDMA
Got all that shit and more"

That song is built around Pink Floyd's psychedelic instrumental "Interstellar Overdrive." On track after track Zach Hill and company sample rock and punk to provide sonic backdrops to match the intensity of MC Ride's rantings. "Beware" borrows the bassline from Jane's Addiction's "Up the Beach;" "Klink" uses the guitar riff from Black Flag's "Rise Above;" "Spread Eagle Cross the Block" samples an old surf instrumental; and "Culture Shock" uses David Bowie's "Superman" in the intro. These punk and rock elements are woven into glitchy industrial noise, and a  few songs take a ragga turn. "Lord of the Game" and "Thru the Walls" both use elements of ragga to create something not unlike Major Lazer performing at a riot.

Throughout all the songs there is a sense barely controlled chaos, as if the MC and producers are pushing things as far as they can go. The songs have the banging beats of hip-hop and the violent energy of punk rock. In fact, this is the best combination of punk and hip-hop since P.O.S.'s 2009 "Never Better." MC Ride never strays into rap rock self parody. He keeps it dangerous and confrontational throughout, making even his most reprehensible lyrics sound good.

If there is one complaint you can make about "Exmilitary" it is that it can be too much, especially if you listen to it all in go. A lot of the songs are incredibly harsh and dissonant, and having Ride yelling in your face gets unpleasant over the course of the album. "Exmilitary" is an uncomfortable experience, one that will induce headaches and cause long-term hearing damage. Still, as annoying and aggravating as it can be, it is also a rush. It takes the listener on a crazed ride, the sonic equivalent of hanging out with Hunter S. Thompson on a trip to Las Vegas.