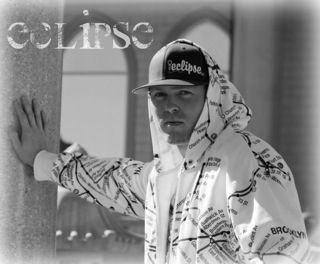 Eclipse is a rapper from Niagara Falls, Canada, land of casinos, strip clubs, imaginary girlfriends and depressing honeymoons. The name of the album references his birthday, July 7, 1977, and to judge by the lyrics, that date is anything but lucky for him. He explains where he's coming from on "No Beginning."

"Just cause I'm white I got it easy, right?
Like cops don't stop me when they see me in the night
Like I ain't got a hard life
My future's bright somewhere out there
But nowhere in sight"

A good example of this is "New York Is Burning," where he takes on everything from child abuse to homelessness to cancer.

"How could a mother hurt her own child?
Call 911 pick up the phone and dial
It's a state of emergency
It's urgent for certain
New York is burning
Stop to think how nice your home is
Now look at the streets that house the homeless
It's hopeless
I'm trying to find an answer
Can't cure AIDS, can't cure cancer
They got nuclear bombs, chemical warfare
But they cutting welfare, shorting healthcare"

"Steps of the Church" is about trying to live right and coming up short. It's a good example of how Eclipse's sincerity is hampered by some clumsy lines. The sentiments are unimpeachable, but the delivery isn't always on point.

The beats are equally earnest, often sampling alternative rock songs to add to the emotional edge. They are well-done, but I'm not a fan of alt rock,and I found than it made the songs sound cheesy. The admirable positivity of Eclipse's rhymes is tempered by the melodrama of the beats, which gets monotonous over the album's 19 tracks.

Despite my criticisms, it is hard for me to be too harsh on "7777," It has it's flaws, but Eclipse is an able rapper with a lot more heart than your average cognac-swilling rapper. If you are looking for hip-hop that keeps it real, Eclipse is worth a listen.