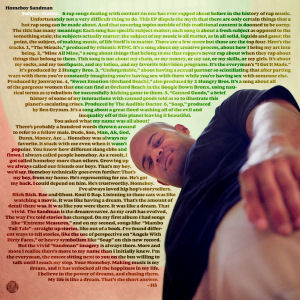 Homeboy Sandman is a rapper from Queens, NYC. He has released two well-received solo albums, 2008's Actual Factual Pterodactyl" and 2010's "The Good Sun." This EP is notable for two reasons. For one thing, it is the first release by Homeboy on the West Coast label Stones Throw. Stones Throw has been releasing more and more non-hip-hop albums lately, so it's nice to see the label return to its roots, and add another MC to its roster. This EP is also one of the first releases that Stones Throw is offering as part of its subscription plan via Drip.fm. The idea is that you pay ten bucks a month and get digital copies of every new Stones Throw release. The first month's offerings were a instrumental version of MED's "Classic," the "Minimal Wave Tapes Volume ," which is a collection of electronic music, and the Homeboy Sandman EP. Drip.fm was started by the guys behind electronic label Ghostly International. It's an interesting concept, and worthwhile for fans of most of a label's output. Hopefully the concept bears fruit. Of course you can buy this on iTunes, Emusic, at Stones Throw's site, Amazon, or one of the few remaining record stores in the world. This being Stones Throw, the packaging is so pretty you may want to fork over an extra four bucks for the vinyl.

I gave "The Good Sun" a high score, and raved about it in my review. I loved the beats, and most of all loved Homeboys rhyming prowess and positive lyrics. After my initial excitement over Homeboy Sandman, however, my enthusiasm waned. I found myself skipping his songs when they came up on shuffle. I chose albums to revisit. I took it off of my hip-hop playlist. So I listened to "Subject: Matter" with the goal of discovering why I got tired of Homeboy Sandman, and hope that I could rediscover what it was that made me like "The Good Sun" so much at first.

In Homeboy Sandman's own words, the EP contains "six rap songs dealing with content no one has ever rapped about before in the history of rap music...This EP dispels the myth that there are only certain things that a hot rap song can be made about. And that covering topics outside of this traditional content is doomed to be corny." However, as I listened to this EP, I realized that one of my problems with Homeboy Sandman is precisely that he IS corny sometimes. He has a goofy positivity, a conversational flow, and a tendency to emphasize the last syllable that leads to word combinations that can only be described as corny. Case in point:

Those lines are clever and funny, but they are also kinda corny. That's not the end of the world, but it does explain why I may have stopped listening to Homeboy Sandman so much. He's too damn nice on the mic. There's no edge, no danger. Which isn't to say he sucks, or that I wish he was rapping about the same old ignorant bullshit, but his flow did keep me from loving this EP.

Corniness aside, Homeboy Sandman is an impressive MC. He's got speed, brains, and an ability to weave really complicated verses together and make it sound easy. His rhymes are thoughtful and deep, he raps about the creative process, celebrating everyday possessions, ex-girlfriends, the hotties at Orchard Beach, and "a great flood washing all of the evil and inequality off of this planet leaving it beautiful." My favorite track, "Canned Goods," uses collecting canned goods as a way to describe both the multitude of crises that humans face as well as people will band together to help each other out.

Production is handled by RTNC 2 Hungry Bros, Jonwayne, The Audible Doctor, and Ben Grymm. They offer up different variations on psychedelic soul, ranging from a pounding drumbeat on "Mine All Mine" to mellower songs like "Soap" and "The Miracle." I'm not sure which coast these producers call home, but the feel is of a New Yorker on vacation in L.A., adapting his East Coast flow to the sun-drenched beats.

Notwithstanding my criticisms of Homeboy Sandman's flow, "Subject: Matter" is a strong EP. Homeboy Sandman proves himself to be one of the most nimble, unique MCs out there, and Stones Throw proves that they still know independent hip-hop.