:: Crown of Fire Records
as reviewed by Steve 'Flash' Juon 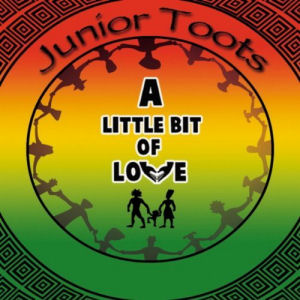 It's a shame that "A Little Bit of Love" isn't available in stores today - after all it is Valentine's Day. I doubt Junior Toots will stay up nights worrying about it though - after all the "love" he's professing is the universal love for all mankind, born from the blessings Jah provide. He's already blessed Junior with excellent reggae genetics, being that he's the son of reggae legend Toots Hibbert, who you may know best from Toots and the Maytals. Then again you may NOT know, which is as good a reason for you to be reading this review as any.

Junior's story deviates from his father's a bit. While both of them were born in Jamaica, the younger Toots has been living in the United States since the 1980's, first in Connecticut but ultimately in California. You will find Toots' roots definitely lend to the reggae format, while his accent has definitely gained a touch of Americanization given he came here at such a young age. There will no doubt be debate about whether or not this is for the best - for some ears he may be easier to understand than more traditional Jamaican artists, while some listeners may feel he's a pretender to a culture he was long ago uprooted and made apart from.

As for me, myself, I and I, there's no doubt to me that Junior's heritage more than makes up for his distance from Jamaica when you listen to him croon his tune. "Physically Spiritually" is classic rasta roots reggae at its finest, singing about how all of mankind shares a common brotherhood. "We have got to be strong like the mountains/and blow like the breeze/keep a steadfast meditation/and keep your mind at ease/forget about when they said nothing good would ever happen." Preach on dread. "Puss and Dog" is a more jamming affair, one which for reasons I can't fathom reminds me of No Doubt - although there can be no doubt Toots is teaching:

"Once upon a time, not so long ago
Birds and bees, the flowers and the trees
The bees and the wasps, they used to go to school
But after the first semester, they would start to act a fool
He think he knows it all, just because he learned to sting
He never realized the knowledge, and fullness of the thing"

Toots is full of lessons and love throughout the 14 tracks of this album. Some songs are incredibly self-explanatory before listening - you don't have to ponder what "If Africa Is Not Free" is about for long. The same goes for the spiritual cry of "Call On Jah," the heritage pride of "Ethiopian From Birth" or the wisdom manifested on "Seek the Truth" featuring Sol Atash. In fact if I could make one criticism of Junior Toots, as much as I enjoyed "A Little Bit of Love," is that it's not couched in the layers of metaphor I've often come to expect from the reggae greats. At times Toots seems to be too straightforward, whereas if you had to delve into the depths of his meaning, discerning his point would be more rewarding.

With a strong musical backing of production from Fabian Cooke, Aston Barrett and Toots' own brother Hopeton Hibbert, "A Little Bit of Love" rises above like a puff of friendly herbal smoke drifting in the island breeze. Toots professes in his bio that moving to the United States changed him into an entirely different person, but it seems to me after hearing his CD that Toots evolved as he needed to while not losing his reggae roots one bit.