Dr. B and Mister :: Just So You Know :: Bandcamp.com
as reviewed by Mike Baber 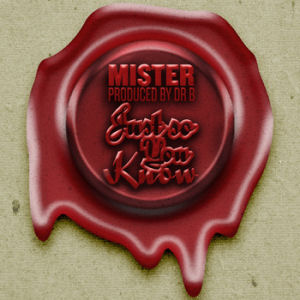 There is something to be said for collaboration albums that feature a single producer working with an emcee and crafting the entirety of the beats, as it allows the two artists to develop chemistry and build off one another's talents. Of course, this is not always a recipe for success; one of the most common problems is that the album is simply too long and the producer is unable to provide enough variety to keep things interesting throughout. After examining the track list for "Just So You Know," though, I immediately knew length would not be an issue. Checking in at only five tracks, the EP from Detroit emcee Mister and British producer Dr. B promises "old-school melodic beats layered with the insightful rhymes" in the accompanying promotional material, and while I was initially skeptical of this all-too-common claim, my doubt would soon be erased. "Just So You Know" may not have the depth of an actual album, but from the moment I started listening, I could tell that Mister and Dr. B stayed true to their word.

In order for a compilation album to really work, the beats have to complement and mesh with the emcee's flow, and this is evident from the very beginning of "Just So You Know." Mister raps with a straightforward, easy to understand delivery, rhyming about everyday issues in his life without adding any fluff or exaggerated claims, and Dr. B lays the foundation with sampled drums and other instruments without overpowering the lyrics. The opening track, "That That," pits soft grand piano keys over heavy drums, complete with flowing violin strings on the chorus, as Mister spits about a girl that got away, rapping "I had a dream about her the other night/ The one with the unforgettable smile and the body I recall was outta sight." Next up is "Food for Thought," with gliding horns, a crooning female vocal sample, and a steady drum loop anchoring the track and a set of orchestral strings smoothing out the beat. Mister isn't afraid to step outside of the range of normal hip-hop subject matter and explore deeper issues, as evidenced by his first verse:

"Indentured servants in the Amazon are cutting down trees
Dilapidating forest so they'll get some money to eat
Because there's no other means to get the presidents
It's evident, though, they'll walk away with less than an Abe a piece
Man, they're slaving in the blistering heat
So if you're complaining about your 8-hour shift, try 15
And that's 7 days a week
Illiterate adolescents and men doing all they can for pitiful ends
The men can't read, either
Sleeping's at a minimum
Just to wake and turn the page like Mr. Seger
Rise and grind the mind to resemble the stumps
That have ended up surrounding animals that have died due to TIMBERRRRRR
Going on from spring to winter
Never heard of internet, never heard of spinners
Born into an environment that almost guarantees loss
Try'na rise above it all and be a winner
See, the liquor is the only escape
Diluting visions of their mental prisons, sticking to diligent land rape
And man, ain't it somethin', that in states over the sea
People drive SUV's in suburbs with three TV's"

Mister returns to more personal issues on "Relationship Blues," though, with the heavy baseline and slow, high-pitched piano keys setting the stage for the track. After guest emcee Elusive spits the first verse, Mister comes on next and tells the story of a new love blossoming and another drifting off into the distance. While he manages to keep things somewhat lighthearted with lines such as "pick-up lines flatter than empty Crest tubes," it's clear his meaningful rhymes come right from the heart, as he spits:

"It had heated up so quickly, she wasn't sure how to feel
But she simply couldn't deny the chemistry was unreal
It was genuine and earnest, it was just she had wanted
Same for him so soon it became an everyday occurrence
Now prior to this engagement, she had a fellow
Who would argue with her nonstop until they fell asleep
When they first got together he would never chastise
But it didn't take long for that ship to capsize
He'd been drinking, thinking his thoughts and actions were no different
They were so different though, that it caused her to grow distant"

"Just So You Know Pt. 2" has more of a traditional hip-hop sound, and the sampled drum loop, jazzy trumpet, and scratched lyrics on the chorus are another testament to the EP's old-school influences. The final track, "What I Do" also features sparse production, with little more than a funky guitar pluck and a rolling bassline, and goes to show that simple but effective layering of instruments can be much more harmonious than an overcrowded track. Mister closes things out by spitting about the life of an emcee and his love for hip-hop, rapping:

"A bit down too much for his skill set
He's ill, even though he feels he ain't killed yet
And still, after scribbling an opening line
He'll go ahead and revise it about five or six times
'Cause it's gotta be exactly what he heard in his head
If it isn't? No scribbling for weeks on end
Now sometimes, he gets so deep in his thoughts
He gets lost, so he needs to breathe deep and pause"

By this point, it's clear that Mister's introspective and heartfelt lyrics have the depth to ensure that things never grow mundane, and Dr. B's production style is a well-suited complement that should give any golden-age hip-hop fan nostalgia. It really is a shame that there isn't more material on "Just So You Know," and while it's not necessarily a bad move to keep the EP short and sweet with no filler tracks, it's hard not to be left wanting more. Regardless, though, the EP is a quality effort from both artists, and the hint of old-school flavor makes it an enjoyable listen throughout. Those looking for gangster-rap influenced rhymes and hardcore lyrics will probably want to steer clear, but hip-hop fans with an appreciation for storytelling and contemplative lyrics should not hesitate to give "Just So You Know" a listen.