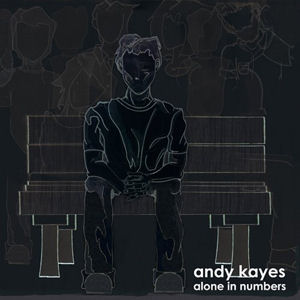 I had a diverting virtual encounter with the contemporary UK hip-hop scene the other day when I watched a graffiti-themed video for the song "Strength in Numbers" by DJ Tricksta featuring nine rappers gathering under the banner of UK hip-hop (notably twenty years after Killa Instinct's "Un-United Kingdom"). At first glance, Andy Kayes would fit into the line-up, another rapper with a British accent striving for recognition for himself and his homeland hip-hop. Yet, as the title of his first full-length "Alone in Numbers" indicates, Andy Kayes follows his own path. One of the reasons for that would surely be that he's lived both in London, England and Lyon, France. In fact in terms of his career so far, the rapper seems more rooted in the French scene, having released an EP as Manimal Instinct ("Retour Aux Sources/Back to the Primitive") in '06 and one under his current moniker ("Invisible") in '09 there.

From the look of things, Andy Kayes now hopes his music crosses national borders and reaches an international audience accustomed to the English language because "Alone in Numbers" contains no French. Kayes himself is willing and able to hit the trail, as evidenced by a series of promotional videos entitled 'J'irai rapper chez vous' ('I'll rap at your home'), where he visits local beat- and wordsmiths in Lyon, Paris and Berlin. Home is a deeper issue to Andy Kayes, though. On "My Shadows" he characterizes himself as a restless soul who's "sick of goin' home cause I don't feel at home yet" and "yearnin' just to fly away / I'd love to pack my bags and leave, I think about it every day." Conversely, he admits on "Runaway," "If I could run away, I wouldn't go very far / I love my city (...) despite the fact she gave me many scars."

Keeping the rapper's background in mind, there's one peculiarity about "Alone in Numbers" it is somewhat hard to make sense of. He repeatedly (in 4 tracks out of 12) refers to "my city." Since way back rappers have been known to mention their city (or some type of geographical entity they call home), and when they do, they usually leave little doubt about which one exactly they mean. Andy Kayes clearly identifies with a city, but says very little else about it. What's more, on "My Shadows" he offers, "I've always been a little distant / I stay aware before a city settles into my system."

By no means would I want to force a rapper to pledge allegiance to one place, but someone who wears his heart on his sleeve like Andy Kayes ("In front of crowds I shout whatever I couldn't say in the past") should be mindful of the details. It gets to the point that when the final track, titled "Where I Grew Up," arrives, one thing you're sure you're not going to learn from it is WHERE Andy Kayes grew up. Well I guess he's just not that type of MC. What type is he then? He's certainly reflective, thinking a lot about dreams and goals. Meanwhile he remains modest, observing, "They want it all - I just want a stable life / and look at myself in the mirror without seein' my doubts."

Kayes finds different formats for his introspection. The rather conventional overseas collabo "I'm Just a Man" with Afu-Ra, the softly orchestrated "Dream Catcher" which packs a fair amount of hit potential, the synthy underground manifesto "Infinite" or the slow moving, melodically rich "Murdered By Angels." From some songs one might get the notion that Kayes may not be overly concerned with rap skills in the traditional sense. His flow, though, is always nimble and works especially well over harder hitting tracks like the Thavius Beck-produced "Sandcastles in Concrete" and Bonetrips' excercise in dark boom bap, "The Man Without a Face," which also happens to feature the album's most fruitful cameo with Copywrite taking the track up a notch with his typical brand of acerbic battle raps.

Musically "Alone in Numbers" fares well with its main contributors Tcheep and Bonetrips (both from Lyon). The production has a now sound without catering to any specific trend but instead managing to sound fresh with a number of acoustic elements. Basic beat arrangements like "I'm Just a Man" and "My Shadows" are saved by the protagonist's clear and sincere voice, while tracks like Tcheep's "Slave to the Coffee Machine" or Bonetrips' "Trail of Tears" achieve a full tone despite measured instrumentation.

Andy Kayes is an interesting MC who says things like "I waste time tryina freeze it" or "If eternal life was a dish would you wanna know the recipe? / I've always written rhymes to give mine a touch of infinity." However, the good stuff comes rather arbitrarily, so that at least I spent too much time trying to figure out what the rapper who pleads, "I'd like to finally meet someone who understands my soul," is trying to tell me. Rapping isn't just a means to an end to Andy Kayes, that much is clear. Exuding innocence and honesty, there's a seriousness to his art that demands to be taken seriously. Now all he needs is more varied subject matter and alternating perspectives. And maybe a little bit of fan support to brighten up his world.